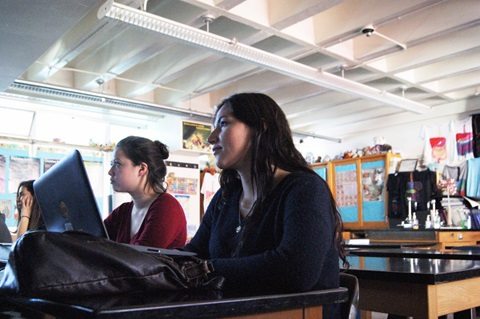 From researching a simple paper for science class, all the way to being able to talk with someone from another country about their science class, technology’s impact on the educational world cannot be denied.

In the span of a student’s school life span they went from using notebooks to iPads, textbooks to laptops and letters to emails to texts. Today’s world has gone from knowing your next door neighbor to knowing someone from Japan.

Increasingly, school districts have realized technology can have a huge impact in the way a student learns.

“In the world in which we live, they [the students] breathe it [technology]. The students pick up their phone and go to Google. They do a search [and] you coal mine for information everywhere,” Micha Villarreal, the technology director for Ysleta Independent School District said.

“I think it’s a good idea, that we’re integrating technology, because now – around the world – kids around our age are using technology like our cell phones, iPads, things like that,” Joseph Krumm, Coronado High School 9th grader, said.

A few years ago, the most advanced technology students and teachers had in the classroom was a smart board; now each student carries around their own laptop. The laptop is used as an educational tool to be able to complete an assignment at home, learn more about a topic and connect with peers.

“The integration of technology is very important, because more and more jobs require some familiarity with word processing skills and web design; but also how to gather information from the internet,”  Brian Keen, an English teacher at Coronado High School, said.

The use of the technology can be helpful beyond the classroom, in student’s home and after high school. The student is no longer confined to the information provided at school, but can now explore the world beyond with internet access.

The technology isn’t just for assignments and entertainment, it can be beneficial to further a student’s knowledge and skills on technology to acquire jobs in the future.

“So, in order for us to meet the needs of our students, we have to make sure that they can compete with their peers here in El Paso, across the state, the nation and even the world,” Shelly Smallwood, the coordinator of innovated learning in YISD.

The internet is also an archive of educational videos that inform students about a certain subject. The educational information is easily accessed through websites such as YouTube, Khan Academy, Ck-12, Crash Course and many others. Additionally, these websites help students with the myriad of tests (STARR Test, PSAT, SAT, and ACT) they take.

One popular option for students is Vsauce, which has 9.6 million subscribers worldwide.

The creator of Vsauce, Michael Stevens, a London YouTuber, said he hoped for students to draw information from his videos.

He added that math and science do not have to be complicated or only understood by “smart people.”

Stevens believes there is a process by which someone learns a certain subject and the way the information is presented to the person, can help to make it easier for the average person to understand.

“Okay here is all the research that’s been done in a field, I’m reading the papers and I’m looking at all the websites then I have to take all of

that, weeks and weeks of learning and condense it into one [20 minute] video,” Stevens said.

He hopes that someone will be inspired by that and do their own research and make themselves become informed about the topic the person is interested in.

“I want to show that, not only that everything can be understood by everyone, but that there’s a really cool side to everything,” Stevens said.

Editor’s note: This is the first is a series of student-sourced stories that we will be publishing as part of our partnership with El Paso ISD’s Journalism Intern Project.  The project has students from three schools: Coronado, Chapin and Burges. All the content, interviews and research is done by the students themselves.