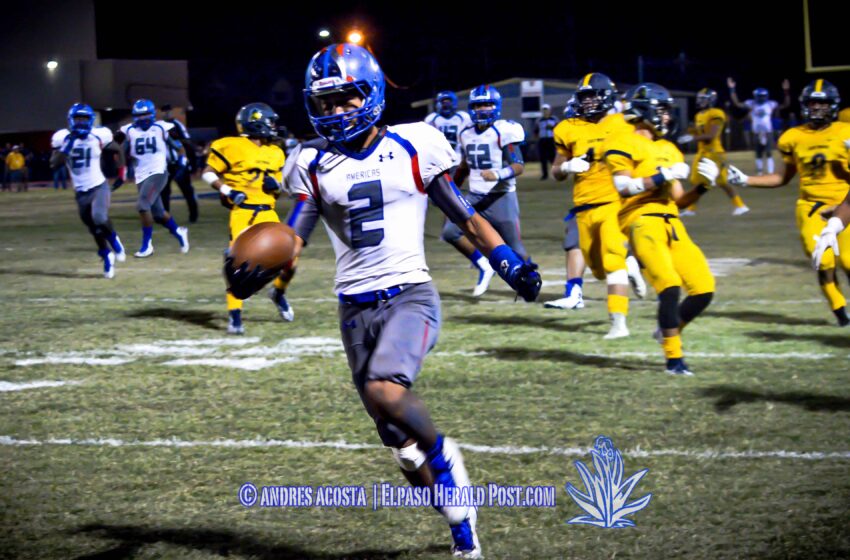 Offense was on display Friday night, as the Americas Trailblazers handed the Eastwood Troopers their first loss of the season 62 to 55 to open 1-6A district play.

In a game that featured eight different players scoring, Americas’ Nathan Carrazco was the hero of the game. With 17 seconds left to play, the game tied at 55, Carrazco caught a screen pass and ran it from 49 yards out for the game-winning score.

“Pretty much try and get the catch, try and get up field and try and get as many yards,” Carrazco said. “I got to trust in my blockers… and the rest of the line, I thank them.”

The game turned into a shootout early,  as Americas opened the game with a 62-yard touchdown run by running back Joshua Fields, Eastwood then answered with back-to-back touchdowns of their own.

The teams exchanged the lead four times heading into the half, with Eastwood leading 41 to 28.

The Troopers added to their lead to begin the second half, as quarterback Mark Torrez scored his sixth of eight total touchdowns to take a 48 to 21 lead.

It was then that the Trailblazers would begin their comeback.

“Nobody ever wants to be in a shootout, you’d like to think you played better defense than that,” Americas head coach, Patrick Melton said. “When it was time for the defense to step up, we stepped up, we out scored them big time in the second half. Kids made plays when it was time to make plays.”

Down by 19, the Trailblazers would score 20 unanswered points to take a 48 to 47 lead with 8 minutes left to play.

The Troopers would once again regain the lead 38 seconds later, forcing the Trailblazers to score once more.

Americas’ running back, Joshua Fields would score his fourth touchdown of the night to tie the game at 55 with 4 minutes left in the game. Fields ended the contest with  139 rushing yards total.

“When you get into a game like this, you have to settle them down and get back to your fundamentals,” Melton said.  “Go back to the first things you learn when you start playing football.”

The screen pass to for the go-ahead score was one of six scores of over 35 yards on the night, Melton said the defense played by the Troopers dictated the call for the screen pass.

“Really we knew they were going to be deep, they weren’t going to let us go deep,” Melton said. “We were just trying to get something quick that we can get down into field goal range, but Nathan (Carrazco) made a big play.”

Americas (3-2) was riding a two-game losing streak while the Troopers were sitting at 4-0 celebrating their homecoming game, but the Trailblazers spoiled the festivities.

“Their strength of schedule wasn’t real hard, we knew we had a good football team,” Melton said. “One thing that we do have that nobody can refute is speed and when it’s time for our kids to play fast, they do.”