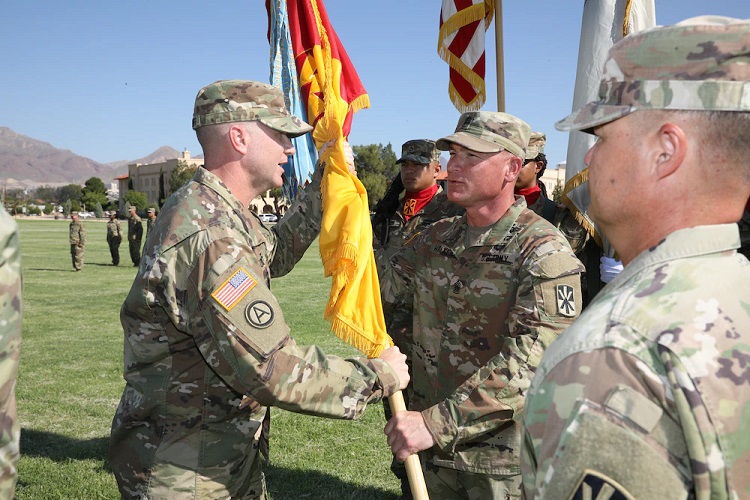 Throughout Dawber’s command the brigade supported numerous exercises, executed multiple FORSCOM rehearsal of concept drills in support of contingency mission planning and mission rehearsal exercises. The command has had units participate in exercises held in North America, the Gulf States and the Middle East.

The host of the ceremony was Brig. Gen. David Stewart, commanding general, 32d Air and Missile Defense Command, who gave accolades to 11th ADA for the great strides the organization has made despite an aggressive and relentless deployment cycle.

“The ‘Change’ in ‘Change of Command’ is critical,” Stewart stated. “Change brings fresh ideas, new perspectives and energy. However, while change can be uncomfortable, our Army and our leaders are adept at change.”

Woodruff thanked Stewart for hosting the ceremony and for recognizing the great men and women of the 11th ADA by quoting Prime Minister Winston Churchill, “We sleep safely at night because rough men and women stand ready to visit violence on those who would harm us.”
A repeat offender to the Fort Bliss area, Woodruff also expressed his thanks to the greater El Paso area.

“I would also like to extend our appreciation to the El Paso community for the hospitality and warm welcome you have extended to our family over the eight collective years we have been assigned here starting back in 1998,” Woodruff said.

Dawber, the outgoing commander, gave thanks to the officers, distinguished guests, the El Paso community, family, friends and Soldiers who were present at the ceremony.

“I am grateful for the support we received from the 1st Armored division, 32d AAMDC and the entire Fort Bliss community,” said Dawber. “It is often said that it takes a village. I am forever thankful to this village because you made it possible for us to achieve maximum readiness while also ensuring care for our people.”

Dawber also expressed his gratitude to the Soldiers under his command for the opportunity to lead the prestigious air defense brigade.

“I am grateful to the American Soldier, the less than one percent who are willing and able to do what we do,” said Dawber. “Because of you, this old man got to live a dream. When I departed in 2003, my one hope was to come back and serve in this great brigade in some capacity.

“16 years later that dream came true when I had the honor of stepping onto this field two years ago. Thank you to the Soldiers of this brigade for giving me and every other leader purpose.”