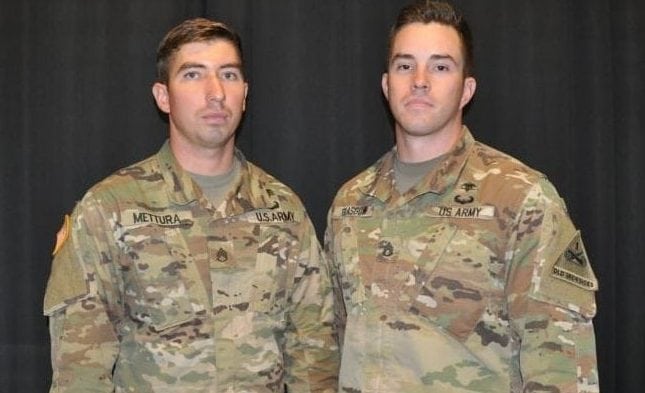 The Soldiers’ preparation began long before the start of this competition. Each competitor earned the title Best Medic at their respective commands before continuing their journey to the ABMC at Camp Bullis, Texas.

“We sat down and studied, specifically TC3 (Tactical Combat Casualty Care),” said Mettura. “We weren’t really prepared for the prolonged primary field care, but luckily Cory has taken some courses, so we really relied on his knowledge and expertise in that area.”

“Prolonged field care is the future of Army Medicine,” Glasgow continued. “I’m going to train my medics in prolonged field care because that’s the new focus. Medics will have to sit with patients for a prolong period of time. They need to focus on how they’re going to save that person’s life.”

“We’re really excited to represent the 1st AD,” said Mettura. “We’re bringing this home to them.”

In a ceremony at Blesse Auditorium on Fort Sam Houston, Command Sgt. Major Michael L. Gragg, U.S. Army Medical Command, talked about how the competitors are the future of Army Medicine.

“As you can see from these great Americans, you can see our future is great,” said Gragg. “For as long as conflict involves humans, there will be Army Medicine. You Soldiers are what make us global, expeditionary, and medically competent. I’m proud of you.”

“Please understand, this competition is a spring board for Army Medicine to continue to care for America’s sons and daughters,” said Gragg.

For more than two decades, the Army Best Medic Competition has challenged Soldier-Medics throughout the Army in an extreme test of medical and soldier skills.

Originally fashioned after the Army’s Best Ranger Competition, the first Best Medic competition was held in 1994 at Fort McClellan, Alabama.