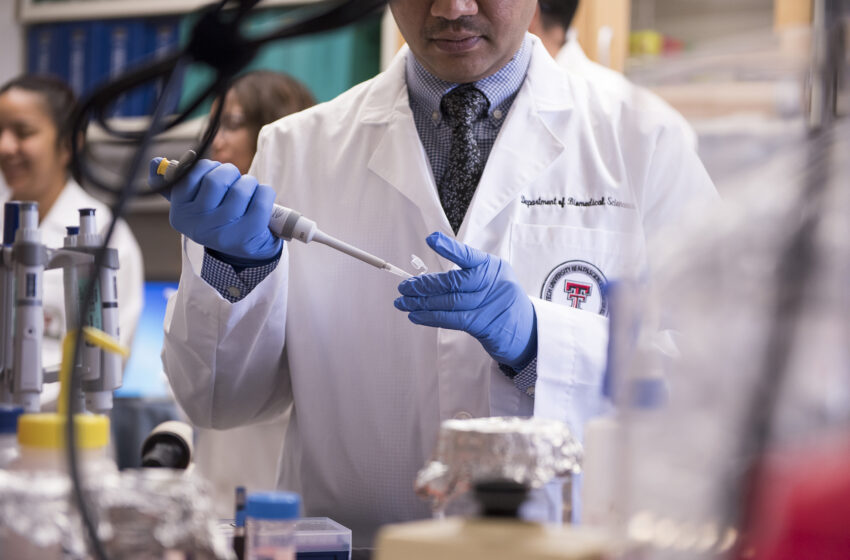 The lab will be headed by Shrikanth Gadad, Ph.D., a CPRIT Scholar recently recruited to TTUHSC El Paso. The research planned for the new lab perfectly complements the cancer research already happening at TTUHSC El Paso’s Center of Emphasis in Cancer, said Rajkumar Lakshmanaswamy, Ph.D., scientific director of the center and dean of the Graduate School of Biomedical Sciences.

“The concept that Gadad is bringing in is really new, and it will help us understand the process of cancer growth and how it becomes aggressive,” Lakshmanaswamy said. “Using that, we can actually come up with some strategies to prevent the growth of these cancers.”

As a CPRIT Scholar, Gadad’s recruitment to El Paso as a first-time tenure-track faculty member is a first for the Texas Tech University System and for West Texas.

Dr. Shokar is a CPRIT Prevention grant awardee who has established and expanded a breast cancer screening program for underserved West Texans.

“Having CPRIT Scholar Shrikanth Gadad recruited to TTUHSC El Paso demonstrates our city’s status as a serious player in life-sciences research,” Margo said. “Cancer disproportionately affects Texans on the border, and this requires us to build a stronger, cancer-fighting ecosystem right here to study how best to address these disparities. I congratulate Dr. Gadad and the entire team at TTUHSC El Paso on this milestone in developing a world-class cancer research program.”

Students at TTUHSC El Paso’s Graduate School of Biomedical Sciences will be fully involved with the new lab and Gadad’s research.

“The research projects that will be conducted in Gadad’s lab will always involve the graduate students in the lab doing research,” Lakshmanaswamy said. “They will be doing one-year research stints in his lab, which is a requirement for their program. So, students will be constantly working in his lab, working on the project that has been funded by CPRIT.”

Gadad said his long-term goal is to connect his research to the community, looking at how factors like stress and diet can affect a person’s chances of contracting cancer.

Since 2009, CPRIT has awarded more than $14.5 million to TTUHSC El Paso, mostly through cancer prevention grants, and more than $58 million to the Texas Tech University System. To date, CPRIT has awarded $1.95 billion in grants to Texas researchers, institutions and organizations and provides funding through its academic research, prevention and product development research programs.

Programs made possible with CPRIT funding have reached Texans from all 254 counties of the state, brought more than 150 distinguished researchers to Texas, advanced scientific and clinical knowledge and provide more than four million lifesaving education, training, prevention and early detection services to Texans.