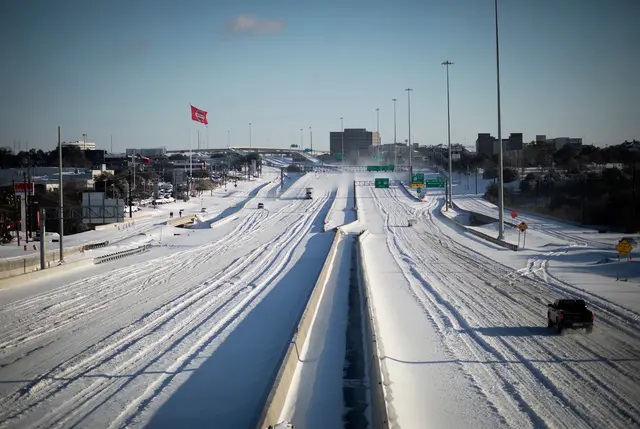 Interstate 35 near Stassney Lane in Austin was blanketed with snow on the morning of Feb. 15. A major winter storm affected the entire state of Texas. Credit: Miguel Gutierrez Jr./The Texas Tribune

When the state’s grid operator, the Electric Reliability Council of Texas, began implementing rolling blackouts at 1:25 a.m. Monday, the outages were intended to be implemented on a rolling basis — up to 45 minutes per affected area, according to the ERCOT.

Instead, some Texans in Austin, Houston and other cities were without power into Monday afternoon and all morning since even before ERCOT called for the rolling blackouts. And some companies that deliver electricity to households and businesses have told customers to expect to be without power through at least the end of the day as they work to restore power generating units that went offline during the storm.

“Unfortunately, if you are a customer who is currently experiencing an outage, you should be prepared to be without power for at least the rest of the day,” tweeted CenterPoint Energy. Houston Mayor Sylvester Turner said midday Monday that more than 1.1 million CenterPoint customers were without power.

Some of the energy sources powering the grid were knocked out by the inclement weather, most of which were facilities run by gas, coal or nuclear energy.

“Most of the plants that went offline during evening and morning today were fueled by one of those sources,” said Dan Woodfin, senior director of system operations at ERCOT.

Wind turbines, which provide a much smaller source of energy for the state’s power grid, were iced over and also out of commission.

The storm that hit Texas is rare for both its scope and its intensity. On Sunday, the National Weather Service issued a winter storm warning for all 254 counties. Cities like Dallas and Austin had temperatures in the single digits Monday morning. Close to the coast in places like Houston and Corpus Christi, the weather was in the teens.

ERCOT announced Sunday night that it had set a winter record for power demand, reaching 69,150 megawatts between 6 and 7 p.m. ERCOT said Monday morning that 30,000 megawatts of power generation had been forced off the system. The grid operator also said it would provide an update at 10:30 a.m. Central time Monday.

The storm has shut down much of the state. Numerous roads are iced over, many schools have closed and, at Gov. Greg Abbott’s request, President Joe Biden declared a federal emergency declaration across the state.

Matthew Watkins contributed to this report.

Disclosure: CenterPoint Energy has been a financial supporter of The Texas Tribune, a nonprofit, nonpartisan news organization that is funded in part by donations from members, foundations and corporate sponsors. Financial supporters play no role in the Tribune’s journalism. Find a complete list of them here.

Matthew Watkins contributed to this report.

Disclosure: CenterPoint Energy has been a financial supporter of The Texas Tribune, a nonprofit, nonpartisan news organization that is funded in part by donations from members, foundations and corporate sponsors. Financial supporters play no role in the Tribune’s journalism. Find a complete list of them here.