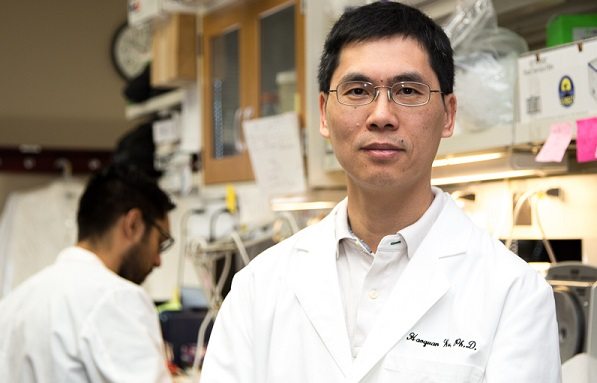 One of the biggest challenges to discovering a cure for the human immunodeficiency virus (HIV) is when the disease becomes dormant — hidden and inactive within the human body. Modern therapy can practically wipe out the virus, but stores of latent HIV soon become active and multiply all over again.

“We need to find a way to wipe out latent HIV in order to find a cure for this disease,” says Haoquan Wu, Ph.D., a biomedical scientist at Texas Tech University Health Sciences Center El Paso (TTUHSC El Paso).

Wu recently received a two-year $420,000 grant from the National Institute of Allergy and Infectious Diseases(NIAID) to study how HIV perseveres in humans. Wu’s hunch is that certain human genes play a role in the virus’ persistence.

“By deactivating one gene at a time, we hope to see — at some point — latent HIV reactivate,” Wu explains. “That will potentially mean that if we suppress this gene in humans with HIV, latent HIV will be reactivated.”

A drug that targets the specific gene, or group of genes, could then be developed to target the genes in humans, reactivating latent HIV reservoirs in the body. These could be then detected and eradicated.

The team plans to use CRISPR-Cas9, a technology that allows scientists to cut and deactivate genes, to conduct their work. Wu and a team of TTUHSC El Paso colleagues have conducted similar research in the past. In 2015, the researchers identified that certain human genes help West Nile virus (WNV) kill its host’s cells. This provided the first glimpse of how host factors can be hijacked by the virus to kill the host’s own cells.

Their findings were published in the journal Cell Reports.