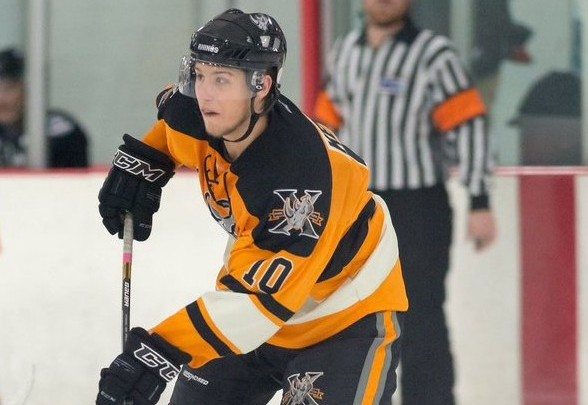 Despite struggling offensively in the first two games in Wichita, the Rhinos notched six goals in the final game of the series to stave off a third straight sweep.

Over the past few weeks, El Paso has fallen short of winning ten times. The Rhinos’ last two wins were in October against the Thunder. Improving with each game in the most recent match up, the Rhinos were finally able to secure a decisive win over a competitive team on Sunday.

Friday night’s game got off to a good start for the Rhinos when Jonah Pearson posted the first goal of the night. Through the second, El Paso netminder Nikifor Mukharev only allowed 2 goals. Wichita, however, capitalized on power plays and scored four third period goals. Even with Brennan Johnsson’s goal near the middle of the third, El Paso couldn’t overcome the penalties and eventually fell to the Thunder with a final score of 6-2.

Wichita opened the second game’s scoring when Peter Cicmanec scored the first of the night. With defenseman Austin Grawbarger returning to the lineup after serving a five game suspension for head contact, El Paso, was able to hold Wichita to only one goal for the next 38 minutes. Recent acquisition Connor Beaudet evened the game when he put the Rhinos on the board at the end of the second.

Marc Zajic’s first third period goal gave the Thunder the lead and a final power play goal clenched the win and the series for Wichita. Despite half the number of penalty minutes as the previous game and Buttazzoni’s save percentage of 90%, the Rhinos couldn’t secure the victory.

In game three, however, the typical Rhino team with a powerful offense and a strong defensive core took the ice. Brandyn Fogarty’s first period goal was quickly followed by one from Kyle Keeder. Captain Joel Gellvear, who was in El Paso for a short period of time last season, answered for Wichita.

Even with two more goals for the Thunder late in the third, Connor Beaudet’s hat trick gave the Rhinos an unbreakable lead. Facing 39 shots, Ryan Buttazzoni was able to make 36 saves and earn his fourth win of the season.

The Rhinos return to the Sun City this weekend to take on the Dallas Snipers for Military Weekend. All active military, veterans, and dependents receive free admission with valid IDs. The puck drops on Friday and Saturday at 7:30 pm and 4:30 pm on Sunday. To keep up with this series and every series, download the Official Rhinos Mobile App.