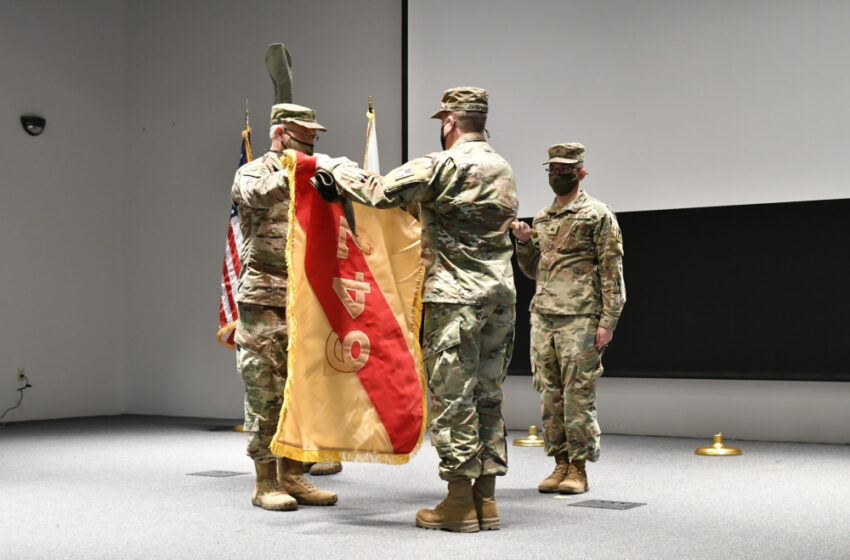 The TOA ceremony is a long-standing U.S. military tradition that marks the official passing of the torch from the outgoing unit to the incoming one.

James thanked Foster for leading the mobilization mission during an ever challenging and changing environment.

“The mobilization mission under normal conditions is a challenging one, add COVID-19 to the mix, and it becomes increasingly complex,” James said. “This mission is absolutely critical to the defense of our nation and one that does not always get the attention or resources it should; however it’s great teams and their leaders that ensure the mission continues regardless of the obstacles they may face.”

James also praised Foster’s leadership during something as unprecedented as the global COVID-19 pandemic. He noted how it affected the mobilization and demobilization processes for a short period.

“The 648th proved themselves to be a flexible and a resilient outfit by rapidly adapting to the COVID-19 operational environment and making the mission happen,” said James. “It was a herculean effort by your team, and you made it look easy.”

“While the Army paused mobilizing and demobilizing units for just a few short weeks, Army leaders quickly realized the need for those forces and rapidly started the mission again,” he said. “And this great team was ready, not missing a beat, even in the complex new environment presented by COVID-19.”

The Fort Bliss Mobilization Brigade is responsible for managing, planning, and coordinating support services related to mobilization and demobilization. It serves as the pre-mobilization liaison for U.S. Army Reserve and National Guard Soldiers by providing administrative and logistical support prior to, during, and after mobilization.

“To the Soldiers of the 648th RSG, the success of the 648th as the Fort Bliss Mobilization Brigade is entirely a credit to you and your efforts to provide the best support possible to our mobilizing and demobilizing service members and civilians,” said Foster.
“The outstanding reputation of the 648th RSG as the Fort Bliss Mobilization Brigade is built on your ability to accomplish the mission under even the most difficult of circumstances.”

After the TOA was completed, Burk congratulated the 648th RSG for a job well done.

“I’d like to begin with a hearty congratulations to the 648 RSG for a job well done as the Fort Bliss Mobilization Brigade and a thank you for a successful relief in place process in transferring your experience and knowledge to your replacements,” said Burk.

As the ceremony came to a close, Burk addressed the enterprise partners of the mobilization mission.

“You can expect from the 647th RSG that we will always treat each other with civility, dignity and respect and that we will treat others like we wish to be treated ourselves. We will compete, but always in the spirit of improving ourselves and those around us.”

“This philosophy of caring for others is not only the right way, but also falls in line with the values of the Army’s Sexual Harassment Assault Response Prevention, Equal Opportunity and Equal Employment Opportunity initiatives. Additionally, this philosophy allows us to combat the corrosives of racism and extremism that exists. Anyone or any action that falls outside of civility, dignity and respect has no place in our formation.”

Due to social distancing measures, the transfer of authority ceremony was attended by a limited number of invited guest. The event was livestreamed for viewing by those unable to attend in person. The livestream recording is available via this link.