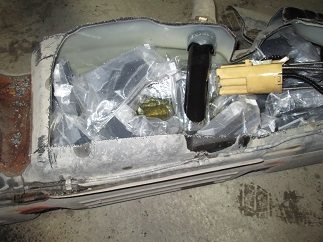 U.S. Customs and Border Protection officers intercepted 82.5 pounds of marijuana yesterday at the Ysleta Port of Entry (POE), which carries a value of approximately $66,040.

The seizure was made at the Ysleta POE at approximately 9:00 p.m. after a 1999 Chevrolet Silverado truck arrived at the port from Mexico. A CBP officer at the primary inspection station discovered the drug cache with the assistance of CBP drug-sniffing dog, “Buster” when the canine alerted to the fuel tank area.

CBP officers examined the gas tank further and ultimately removed a total of 78 bundles of marijuana from the tank area. The marijuana had an approximate weight of 82.55 pounds.

“As we continue to see, the holidays are not exempt from smugglers attempting to bring illicit drugs into the United States through our international ports of entry”, according to Beverly Good, CBP El Paso Port Director.

CBP officers arrested the driver of the load, a 26-year old male from Delicias, Mexico. The Assistant U.S. Attorney accepted the case for prosecution. The vehicle and narcotics were seized by CBP as evidence.