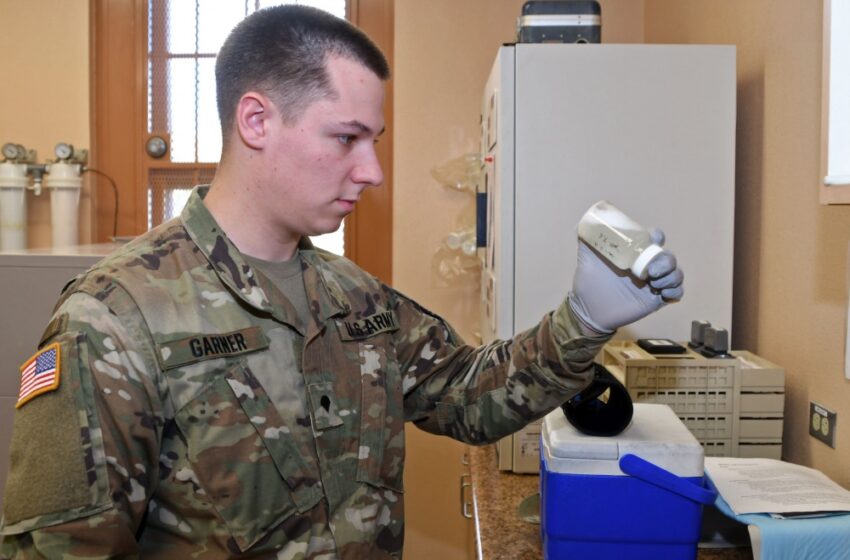 Within the assortment of buildings that have uniform structural design, a painted Red Cross prominently signifies the aid station of the MacGregor Range Complex at Fort Bliss.

According to Maj. John Bricker, a medical-surgical nurse for the 7413th TMC and officer in charge of the MacGregor Range Aid Station, the unit has been working steadily since their activation in the beginning of March here.

“We’ve seen over 2,600 Soldiers since March, for various things such as colds, flus, and 224 musculoskeletal injuries,” said Bricker. “For MacGregor alone, we’ve also seen 252 cases in the respiratory category, such as asthma and cold-related issues.”

The 7413th TMC, consisting of El Paso local Soldiers and out-of-state augmentees, were spread out to multiple sites in Fort Bliss in support of the Mobilization and Deployment Brigade, Directorate of Planning, Training, Mobilization and Security and its mission.

“There are 37 of us right now, but we don’t all work here at the MacGregor Range Aid Station,” said Sgt. 1st Class Elizabeth Ortiz, a licensed vocational nurse for the 7413th TMC and detachment noncommissioned officer in charge for the MacGregor Range Aid Station. “Besides here, we have Soldiers working with Fort Bliss dental, in preventative medicine, providing assistance in the Soldier Resiliency and Readiness Center, and working in the Soldier Family Health Clinic.”

In addition to its rudimentary services and provisions, the MacGregor Range Aid Station harbors additional capabilities to augment its functions.

“We’re considered a Role +1 clinic because of the addition of our X-ray machine and lab capabilities,” said Staff Sgt. Luis Flores, a radiology specialist for the 7413th TMC. “I take a lot of radiological exam requests here, and they pertain mainly to upper and lower extremities, as well as chest X-rays.”

Seven months into their own mobilization, Soldiers of the 7413th TMC adapted to their multifaceted operation by regularly cross-training with each other.

“We do a lot of ‘left seat, right seat’ training with each other,” said Flores. “That is, everyone here has an idea what to do even though it’s not their Military Occupational Specialty, and they’re able to jump in to assist. It really streamlines our health and patient care.

Everyone knows their roles, and everyone steps up when they need to,” Flores said.

The 7413th TMC not only provides medical care, but also prevent diseases and other illnesses with their preventive medicine group. Maj. Jeff Finley, an environmental science/engineering officer for the 7413th TMC, said he and his Soldiers operate in tandem with their active-duty counterparts to maintain scrutiny of the Fort Bliss training ranges.

“At least once a week, we go and collect water samples through several places at Fort Bliss, and at the water and distribution points at Doña Ana, MacGregor, and Orogrande,” Finley said. “We also put out weekly mosquito traps in suspected problem areas, such as golf courses and areas with stagnant areas, and conduct monthly inspections of dining facilities and Mobile Kitchen Trailers to ensure they’re following proper sanitation procedures.”

Finley emphasized the importance of periodic inspections, citing an incident that occurred earlier this year.

“During a routine inspection at the MacGregor Dining Facility, we found that the ice was contaminated with E. coli bacteria,” Finley said. “First, we told the staff to immediately stop serving ice so we can figure out the problem. We then decontaminated the ice machine and the drink service areas, and then it was no longer a problem anymore after that.”

According to Lt. Col. Francisco Crespin, a family medicine physician for the 7413th TMC and the medical director of the MacGregor Range aid station, the unit’s bevy of functions tie into their main objective – to enhance readiness and reduce detriment of Soldiers in deploying units.

“We try to keep Soldiers healthy, and ensure that their minor issues don’t escalate into major ones that would keep them from being deployed,” said Crespin. “Also, it’s so Soldiers don’t have to drive an hour and a half to main post and back, which can cause them to lose significant training for their deployments. Just having this easy access for them gets them back quicker to their jobs.”

The 7413th TMC remain steadfast in their mission until their successors, the 7412th TMC, arrive in March 2019 to take their place.

“I really want to give credit to my team out here, as this is the best unit that I ever had the opportunity to serve with,” said Flores. “They’re a great group, and I give them kudos for that.”