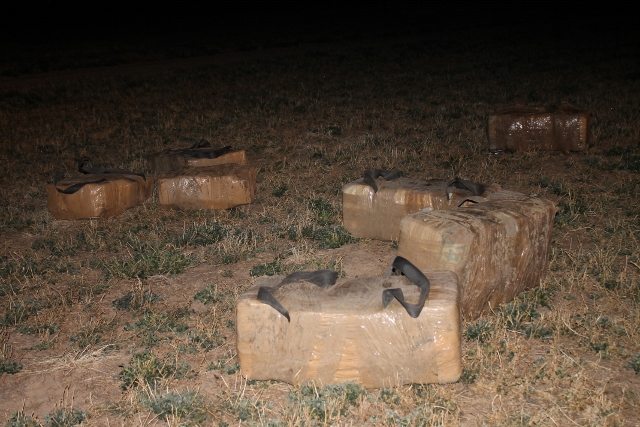 On Wednesday, Border Patrol agents assigned to Clint, Texas were alerted to a possible illegal entry east of the Tornillo Port of Entry. Agents had begun the process of tracking the illegal crossers when they came upon seven bundles of suspected contraband. One subject at the scene attempted to conceal himself, to no avail.

Additional agents from the U.S. Border Patrol’s Bike Patrol Team arrived and continued to track the suspected smugglers. The agents soon caught up to the subjects and placed them under arrest. All five individuals claimed to be Citizens from Mexico.

Agents determined that three of the five subjects are in fact juveniles. In all, 385 pounds of marijuana were seized with a street value of $308,000.

On the same day at the Las Cruces Immigration Checkpoint on I-25, Border Patrol Agents were conducting immigration inspections when a Ford Mustang sedan entered the inspection area. Agents noticed the driver displayed unusual mannerisms when being asked routine questions, and became suspicious.

Consent to search the vehicle was granted, and a canine service dog then alerted to illegal contraband. An in-depth search of the vehicle’s dash and rear bumper revealed over 100 small bundles of marijuana hidden within those compartments.

The total weight of the contraband was 116 pounds of marijuana, valued at an estimated $92,800.

The previous Monday at approximately around 2:00 a.m., Agents from Lordsburg, New Mexico spotted three subjects in an open field

making their way into our country.  The individuals appeared to be carrying large backpacks, and when approached by agents, they discovered the backpacks contained marijuana, and the subjects had illegally entered the country.

The suspected smugglers were transported to the station for processing and identification.  All subjects were revealed to be Mexican nationals.

All the above suspected smugglers and their drugs were transferred over to the Drug Enforcement Agency and will be pending prosecutions.