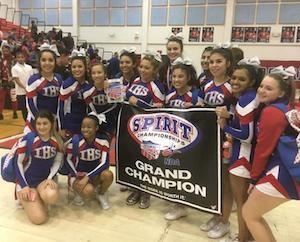 The Irvin High School cheerleaders are in high spirits after winning the Grand Champion title this weekend at the Battle of the Sun City Spirit Championship at Socorro High School.

Winning this title comes at the heels of being voted Best High School Cheerleaders for 2015 by The City El Paso Magazine.

“The team was excited to show what they had on the mat,” coach Crystal Guerrero said. “Winning the Grand Champion title validated winning the Best of 2015 award.”

The team competed against five other teams for the regional title, practicing their routine four days a week since last June.

“They were excited to win but mostly just happy to be able to represent the Northeast and Irvin High School in such a positive manner,” Guerrero said. “That and making their parents proud is what matters most to them.”

This is the third year Irvin wins the regional title, a fact they hope will propel them to earn a national title as the team heads to Dallas this weekend for the NCA High School Nationals.

“It was really awesome winning Grand Champion, a good experience,” senior Melissa Silva said. “It will give us more confidence to compete at the national level and hopefully bring back a national title.”