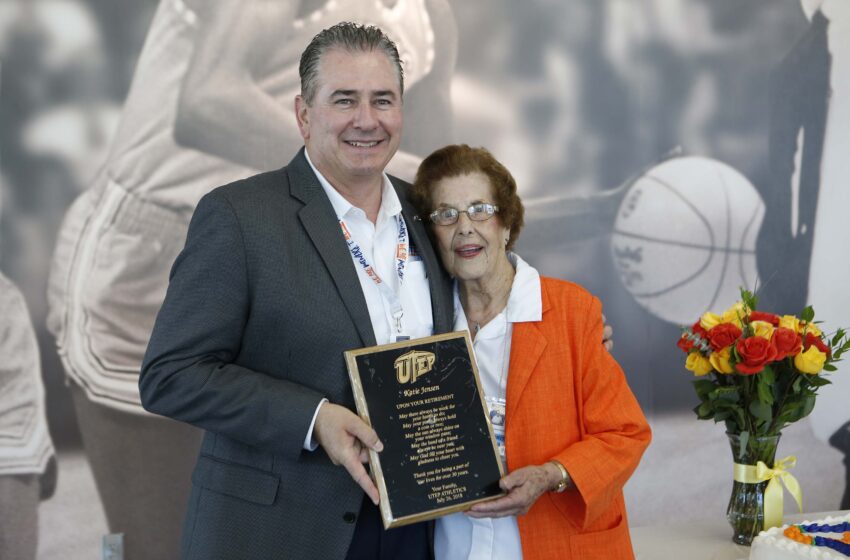 A beloved 98-year-old administrative assistant who served The University of Texas at El Paso’s Track and Field office for the past 31 years was celebrated for her effectiveness as much as her hugs and cookies during her retirement luncheon, held last week.

Katie Jensen, who used safety pins to attach a white runner’s bib with the number “31” to the back of her orange jacket, was all smiles as she mingled with friends, family members, co-workers, current and former coaches and campus administrators, to include University President Diana Natalicio, in the lobby of UTEP’s Foster•Stevens Basketball Center.

Organizers used a sports/track theme to decorate the round tables that spanned the lobby. Items included batons, track shoes, mini-hurdles, pompoms, and plastic cups that held up photos of Jensen through the years.

After a Mexican meal of mini-flautas, picadillo and sides, Director of Athletics Jim Senter called the guest of honor to the middle of the room, where he praised her for her great work through the years. Senter, who joined the University in November 2017, said it was a treat to work with Jensen before he presented her with some gifts. She received a wood plaque from UTEP athletics that thanked her for her years of service and wished her well in her future endeavors, and a large white UTEP football jersey with the blue number 31 and the name “Jensen” stitched on the back.

“This is unbelievable,” Jensen repeated several times as her friends and family applauded vigorously.

After composing herself, the mother of two, grandmother of six and great- and great-great grandmother of too many offspring to remember, shared a quick work history from her start at State National Bank (now Wells Fargo) in downtown El Paso in 1950 to her decision to apply at UTEP in 1986. The El Paso native said she heard the track office needed help.

“I’ve been there ever since,” said Jensen, who continues to drive herself to work from her west El Paso home near Coronado High School. “I’m surprised you’ve allowed me to stay this long.”

All kidding aside, Jensen spoke from the heart as she called her 31 years at UTEP a wonderful time. She spent a few minutes complimenting the student-athletes, many who lovingly referred to her as “nana.” She called them kind, thoughtful, courteous and generous.

Jensen thanked members of the University community, from President Natalicio on down, for their support of UTEP athletics, especially track and field. When she leaves – her last official day is Tuesday, July 31 – she will take her UTEP family home with her, Jensen said as she covered her heart.

“I’ve led a blessed life,” said Jensen, whose husband of 40 years, Ronnie Jensen, died in 1980. “I’ve truly enjoyed every minute here. I wouldn’t have wanted to be in any other department. Thank you for many, many happy days.”

Jensen said she decided this was the right time to retire to allow a new person to settle in the job before the new academic year begins in August. It was a tough decision, but she stands by it. She said she has no immediate plans other than to crochet and knit items for family and friends to include a baby blanket.

After the presentations, President Natalicio expressed her fondness for Jensen, an always loyal and energetic presence in the athletics department. She also used the occasion to reflect on how many UTEP staff and faculty help to create the University’s warm and friendly atmosphere and strong relationships.

“If anyone epitomizes UTEP’s family spirit, it’s Katie,” President Natalicio said. “Everyone knows her. She’s always cheerful and so very proud to be a member of the UTEP family. Oh, and she never ages!”

Bob Kitchens, UTEP’s head track coach from 1988 to 2010, joked that he and Jensen spent the first few years trying to figure out who was in charge. The Hall of Fame coach said her work ethic and positive outlook impressed him.

“I learned to respect her and appreciate her,” he said. “She’s a wonderful lady. I knew she had my back. I couldn’t ask for a better person (as an assistant).”

Just inside the event’s front door was a memory book where guests could share a thought about Jensen, an El Paso native who ran sprints for the Austin High School track team in the 1930s. She attended the Texas College of Mines (now UTEP) for a few years but did not complete her degree to help at home. The book already had various typed emails from Miner alums and others such as former athletic director Bob Stull, who could not attend.

The messages praised “Ms. Katie” as a teacher who helped the writers to grow as people. They wrote of their admiration of her work ethic. One person described how Jensen found her on the floor stretching, told her she was doing it wrong, and proceeded to get on the floor to show her the proper technique. Others thanked her for her smile, advice, guidance, dedication, thoughtfulness and unconditional love.

“You have become our Nana away from home,” one wrote.

Rita Lerma, Senter’s administrative assistant and the event’s lead organizer, said her life was richer for having known Jensen these past 19 years. She laughed at recollections of Jensen giving positive affirmations to office machines that seemed to need encouragement.

“She had a great attitude … a good outlook on life,” Lerma said. “I think she’s amazing. I’m grateful to have had her in my life.”