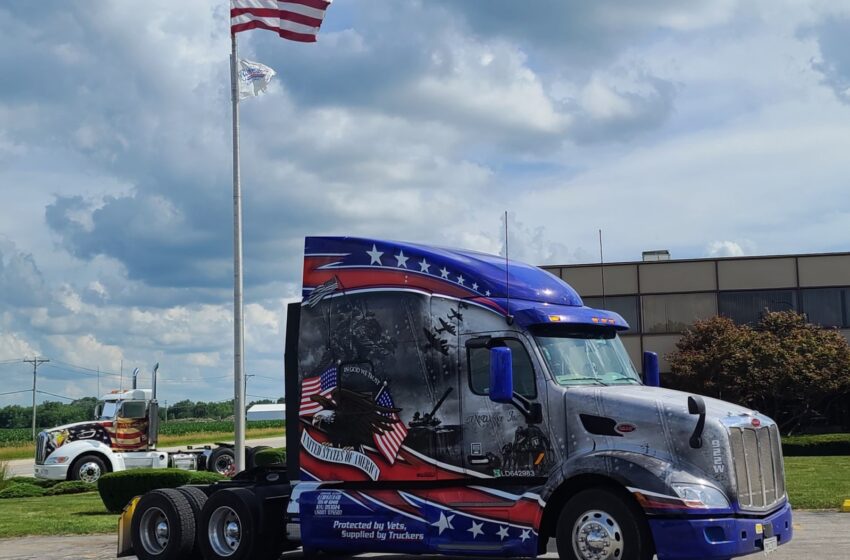 He had driven for his brother previously and decided to branch off on his own. Never was it imagined 75 years later that one-man operation would expand to over 200 trucks operating in 48 states, Canada and Mexico.

The story of A.N. Webber Inc. “Webber” and its growth from the founder’s home in tiny Chebanse Illinois to a comprehensive transportation provider for Fortune 500 companies is a testament to a commitment to customer service, local employment and excellence.

By 1958 the company’s needs were growing for more equipment.  A.N. “Neal” Webber Jr. joined his father in the family business after an honorable discharge from the US Army. He brought his wife, Dee, into the business with him; she was a driving force within the company for many decades until her retirement. Within a few years the family business had expanded from dump box trailers to flatbed services, hauling rebar out of a local mill in Kankakee Illinois for the creation of the Interstate Highway System. Neal Jr. drove trucks while Dee ran the office.

Neal Sr. retired in 1975 at the same time A.N. Webber Inc ushered in a new generation to the family business.  Alan N. Webber graduated from high school and became the 3rd generation of Webbers in the transportation company, working for his father. Over the ensuing years, many family members worked at the company. By 1980, during a raging blizzard, the Webber’s moved the operation to a new, larger facility on the south side of Kankakee.

In 1981 one of Webber’s largest customers, the A.O. Smith Corp “AOS” moved their production facility from Kankakee, IL to McBee, SC.  This move prompted Neal Jr. to open a second terminal near the AOS manufacturing site.

The 80’s ushered in several changes to Webber.  First was the purchase of Strassy Service System which provided for a larger geographic delivery capability within the state of Illinois, when freight transportation was still highly regulated for intra-state traffic. Alan Webber became President of the various Webber companies. Central operations were moved to their new expanded terminal, shop and warehouse facility in McBee SC to better coordinate the growing business out of the South Carolina terminal.

AOS opened another production operation in Ciudad Juarez, Mexico with a warehouse facility in El Paso Texas in 1991.  Shortly thereafter Webber established a terminal in El Paso inside the AOS warehouse.  By 1997 the volume of business would require Webber to build their own terminal to accommodate their growing operations, including shippers such as RCA, Zenith, and Hasbro.

Also, in 1991 Neal Jr. purchased the former AOS building in Kankakee, renaming the facility South Tec Development Corp.  With more than one million square feet of space, the former plant was recreated to a business offering warehouse and manufacturing space. The building was quickly filled with tenants, including Webber moving their corporate office in, where it still resides today.

The year 1993 brought new trucks and new dispatching systems.  The cabover trucks Webber had been running for over 20 years were transitioned to more aerodynamic conventional Peterbilt tractors. Also, Webber entered the digital age by purchasing TMS Software to digitize the entire operations process.

The turn of the 21st century saw many changes at AOS and they brought Webber with them.  The first move was to Johnson City Tennessee, where Webber had a terminal for a few years, and later to the Nashville Tennessee terminal, where Webber has their third terminal today.

In 2005 Alan launched the company into the logistics business, naming it, what else – A.N. Webber Logistics, Inc. In 2018, Alan’s son, Zach Webber, fresh from a 5-year stint with a larger logistics company, came abord to run A.N. Webber Logistics as its Vice President.  The now robust brokerage division had doubled revenue over the last year and tripled headcount. The logistics division now accounts for more than 50% of the revenue, and additional growth is planned.

Memorial Day, May 30 2016, the driving force behind Webber, Albert Neal Webber Jr. passed away at the age of 78, at his home surrounded by family.  Alan Webber assumed the role of CEO and Alan’s nephew, Todd Perzee was named as President of Webber to oversee the day-to-day operations. Todd, the son of Kae Webber, Alan’s sister represents the 4th generation of the Webber family to oversee the operation and has led the company to even more growth. It is expected Zach will follow Todd in the future.

Today, the diversity of equipment, including dry vans, drop frame vans, containers, flatbeds, and tankers, along with services such as warehousing and logistics, gives A.N. Webber, Inc. and its sister companies the capability to provide total logistics services to its many customers.

Our 75 years of a commitment to excellence has surely laid the foundation for several generations to come.