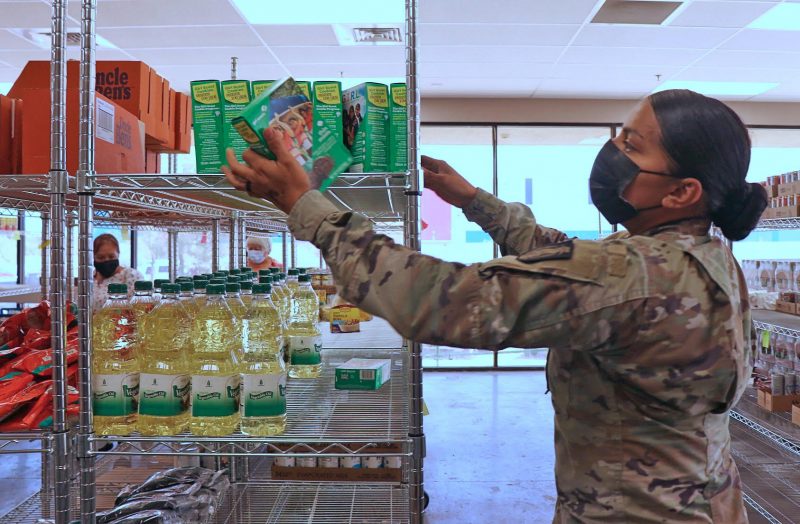 “What we were told is that the governor would be deploying them to the border, to guard the border from people coming across and to prepare the border for the building of the wall,” said El Pasoans Fighting Hunger CEO Susan Goodell.

In late July, the governor ordered an influx of men and women from the Texas National Guard to the Rio Grande Valley and the surrounding areas to assist the Texas Department of Public Safety in its border security operations.

On Tuesday, Abbott authorized the National Guard “to enforce Texas law, including arresting people who have crossed the border illegally and violated Texas law.” He also said the Guard “is also helping with the early stages of constructing border barriers and a border wall.”

Abbott’s office did not respond to emails requesting comment. The Texas Military Department didn’t respond to questions from El Paso Matters, but issued a statement.

“The Texas Military Department initially responded as a temporary solution to support food banks across the state of Texas following the COVID-19 shutdown in March 2020, after the volunteer work force was sent home. Service members have continued to serve these organizations as needed at the request of their county and the Texas Division of Emergency Management,” the statement said. “As many Texans have returned to work and their volunteer organizations, the need for Texas Guardsmen in this capacity diminished. As such, these missions are starting to come to a close. The Texas Military Department is always ready to serve the citizens of Texas when called upon.”

Goodell said El Paso is the only food bank in Texas slated to lose all of its Texas National Guard support.

“We’re uncertain why our situation is different, we’re uncertain if they’re going to extend the stay of Texas National Guard, and how long that would be,” Goodell said in a phone call Tuesday. “We are going to be forced to close the West Side location for two weeks, starting next week.”

El Pasoans Fighting Hunger grew exponentially during the pandemic, becoming the third largest food bank in the national network behind Houston and Los Angeles, Feeding America spokesperson Zuani Villarreal said. The food bank quadrupled the amount of food it gave away, from 32 million pounds in 2019 to 139 million pounds in 2020, to people who needed support in the pandemic.

Goodell said the demand has stayed steady since January of this year, and that the other 200 food banks in the Feeding America nonprofit network are also in crisis mode with higher demands than pre-pandemic times. Goodell said that has greatly reduced the amount of mutual aid food banks can send to each other.

“This is a disaster, like none of us have ever seen before,” Goodell said. “It’s not like other disaster periods where 199 food banks would come to the aid of one.”

How you can help El Pasoans Fighting Hunger

Until August, El Pasoans Fighting Hunger operated four “mega-pantries” to provide shopping carts of food for up to a week for hundreds of thousands of food-insecure families. The mega-pantries are open five days a week, for a minimum of five hours a day, unlike many of the smaller pantries, soup kitchens, shelters and school programs the food bank also stocks. The smaller organizations often have variable schedules and limited supplies to give away.

Goodell said 85% of food distributed in El Paso went through the four mega-pantries and Kelly Center for Hunger Relief pantry, while the smaller partners distributed about 15%.

Since volunteer groups decreased over the pandemic, Goodell said the food bank relied on the hands supplied by the Texas National Guard, as well as local and national nonprofits, to keep people fed.

Goodell said the state gave conflicting information about Texas National Guard extensions at other food banks on a phone call last week, saying that troops could stay at other Texas locations through September, and possibly into December.

Michael Guerra, the chief resource officer at the San Antonio Food Bank, said the food bank there saw a reduction from 90 Texas National Guard members to 63, and were unsure if troops would stay past the Sept. 3 extension.

“It’s been a pretty fluid situation with the (Texas National Guard), ‘You’ll know when you’ll know,’ until then, you don’t,” Guerra said.

Troops have departed from El Paso since the beginning of August, decreasing from 90 members down to 30.

In early August, the food bank permanently closed two mega-pantry locations because of a lack of volunteers to replace the recently departed Texas National Guard troops and other organizational help. That’s caused an increase in wait times for people trying to get food assistance.

Leonore waited in line with her 81-year-old mother Annamarie to pick up their shopping cart full of groceries at the El Pasoans Fighting Hunger Food Bank. The family asked to be identified by their first names only because they didn’t want to be recognized.

She’s accompanied her mother every Friday for a year, picking up the senior box for Annamarie and her husband. Once a month, the basic staples are supplemented with a shopping cart full of food that also includes seasonal vegetables and fruits.

“We appreciate and use everything, it’s been excellent help for the both of us,” Leonore said.

Many of the dozens waiting in line Friday told El Paso Matters they came from areas that the Horizon City and Northeast mega-pantries served before closing.

Goodell said without Texas National Guard aid, and a gap before new AmeriCorps volunteers arrive, the West Side location on Doniphan Drive would need to be rearranged as a self-serve operation because there will be fewer people to put boxes and food carts together.

The closure could become permanent, depending on volunteer levels. The closure would have a “far more significant negative impact,” for the West Side, Goodell said, since it doesn’t have additional soup kitchens or food pantries to provide for needs in the area.

“There’s just so much uncertainty, that we don’t have an answer to that question,” she said.

Prokop is a climate change and environment reporter with El Paso Matters. She’s covered climate, local government and community at the Scottsbluff Star-Herald in Nebraska and the Santa Fe New Mexican. She can be reached at dprokop@elpasomatters.org.