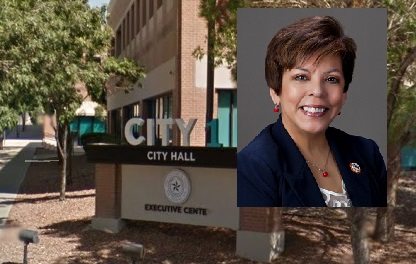 In November of 2016 Emma Acosta, current El Paso City Representative for District 3, formally filed her appointment of a campaign treasurer for the candidacy of Mayor of the City of El Paso; on Tuesday she’ll make it official.

Via a Monday afternoon news release, Acosta’s campaign announced her intentions to run for the city’s top spot.

Supporters, friends, and family will be hosting the campaign Kick-Off at the Best Western Plus El Paso Airport Hotel & Conference Center on Tuesday, January 17, 2017 from 5:30 p.m. to 7:30 p.m.

Acosta is a native El Pasoan, having grown up and raised a family of her own in the East-Central area of the city. In June 2008, she was the first Female elected to serve as the District 3 City Council Representative for the City of El Paso.

Acosta was re-elected in May 2009 and again in May 2013 when she ran as the only unopposed candidate on city council. As City Representative, Acosta has twice served as City of El Paso Deputy Mayor Pro-Tem, as a member of the El Paso Metropolitan Planning Organization Transportation Policy Board, and serves on the Texas Municipal League Board of Directors.

Friends and supporters shared their feelings regarding Acosta’s bid for the mayor’s seat.

“We have a great leader in Emma. She can lead, secure, and ensure that our city keeps evolving and growing in all corners of our community. Emma’s public service tenure and track record in City Council speaks louder than words. She couples her leadership abilities for demonstrating and possessing a mature well balanced temperament with council and at council meetings,” stated Ms. Belen Robles.