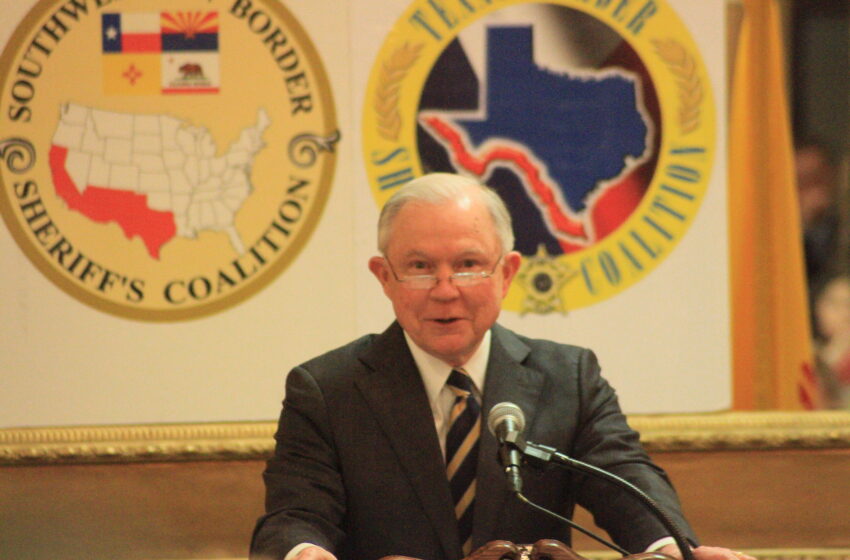 LAS CRUCES – Providing 4,000 National Guardsman to assist, ending of “radical” catch and release practices, and reducing the backlog of immigration cases were the resounding messages that Attorney General Jeff Sessions left a group of about 150 county sheriff’s and border patrol agents during the Southwestern Border Sheriff’s Coalition spring conference.

Just outside about 150 protestors from the Border Network for Human Rights, churches and other organizations gathered outside the hotel demanding that Sessions leave the border.

On Facebook, Fernando Garcia, director for the BNHR said that Session’s message and the deployment of the National Guardsmen along the border was a war against families.

The coalition, which comprises of sheriff’s offices from 31 counties in Texas, New Mexico, Arizona and California, is an annual event that provides additional training to law enforcement that are within 25 miles of the international boundary line.

In his to Las Cruces on Wednesday, Sessions congratulated the U.S. Border Patrol, the Department of Homeland Security officers and the county Sheriff’s of the Southwestern Border for keeping America safe.

“The independently elected sheriff has been seen as the people’s protector,” Sessions said. “Keeping law enforcement close and accountable. So the work you do is essential because it is keeping safety in America. I believe it, and the Department of Justice believes it and President Trump believes it. We have your back and you have our thanks.”

Sessions spoke to law enforcement officers just before his speech, without members of the media. After his speech he did not take questions from the audience or the media.

He repeatedly stated that President Donald Trump and his administration stood with them and would support them. On Monday, hundreds of National Guardsmen deployed in the states of Texas, New Mexico an Arizona.

“They can help,” Sessions said. “Certain things they are not going to be able to to do and they will not be doing. But, there are many ways that they can be supportive and helpful.”

According to the U.S. Department of Defense memo, the troops will simply work help in identifying vulnerabilities.

“The troops will not perform law enforcement activities or interact with migrants or other individuals detained by DHS (Department of Homeland Security) without approval from (Defense Secretary James) Mattis,” the Memo states.

Construction for a border wall replacement in Santa Teresa began on Monday, according to the U.S. Customs and Border Protection.
In a press release the USCBP said the construction of the wall was awarded on Jan. 22 to Barnard Construction of Boezman, Montana.
The area in which replacement will begin is along the 20-mile section of the existing vehicle barrier. The contract includes drainage improvement along that section.

Construction of the wall is slated to run for 390 days and estimated to cost $73.3 million.

According to the CBP the El Paso sector had 25,193 illegal aliens apprehended and 24,189 pounds of marijuana and 140 pounds of cocaine seized.

Sessions added that while he knew it was not the place of Sheriff or State law enforcement to enforce immigration law, he asked that they consider voluntarily doing so as the Border States face a “crises” according to Sessions.

Additional help by this presidential administration will also be provided as many as 100 immigration judges to the border areas, Sessions said.

“We are actively working with our partners in homeland security to ensure that we can deploy judges electronically and by video teleconference so that they can help us handle a lot more cases efficiently.”
He added that the threshold the administration would like to see is a completion of 700 cases by each judge.

“This is the average by some judges, and some are well below that,” he said. “This is not a radical goal. It’s positive to have consistent and efficiency and productivity in our immigration system.”

Throughout his speech Sessions referred to criminal activities that some undocumented immigrants have been arrested for. He spoke about the need to dismantle the MS-13 gang, and then added that along the border law enforcement agencies may have additional challenges with gangs that are “bigger” than MS-13.

Sessions went on to speak about the opioid epidemic and the number of illegal drugs that cross into the United States through the Mexico border.

“So, we are going to step up our efforts to achieve zero tolerance; zero tolerances on releases and 100 percent prosecution wherever possible,” Sessions said. “And it’s not possible, probably – to do everything we want to do this year, but we are moving in that direction.”

He indicated that an uptick in illegal border crossings within the last month could be because of the “loopholes” within the immigration system, the lack of a wall along the southern border, and probably because things are going well in the Trump economy.

“They claimed (illegal aliens) that they couldn’t be sent home because of fear, surprisingly the exploitation and the abuse of a credible fear loophole has been a big problem for us,” Sessions said.

“And if you talk to our Border Patrol and ICE and HIS and U.S. Attorneys then you know that’s true. After the release from custody, a large number of illegal aliens disappear. They abscond – they never show up for the hearing in court. The vast majority that do show up have had their asylum claims denied because their claims were not justified.  Just because you have danger in one town in Mexico or any other country doesn’t mean you can’t go some other place in that same country. If someone feels dangerous that doesn’t mean you get the right to demand citizenship or entry into Canada. Give me a break. That’s never been the way the system was ever intended to work.”

Sessions then briefly spoke about the catch and release of children that enter illegally into the United States and added that it is unknown who they are released to.

“This is not a healthy way for us to operate,” he said. “It encourages people to make the trip that they shouldn’t be making at great expense and risk.”

He added that the flow of farm workers who are willing to get paid less are “pulling down the wages of Americans that need a better chance to advance themselves….It huts particularly the recent immigrants who are trying to get their feet on the ground as well as minorities. They are clearly suffering the most from these policies. They have dreams too. They want to do well too.”

Sessions visit comes just a few days after national media outlet reported President Trump had weighed the option of whether to fire the Attorney General, and replace him with Scott Pruitt, Chief of the Environmental Protection Agency.

But since Sessions recused himself on March 2017, from special counsel Robert Mueller’s investigation on whether interference with the 2016 presidential election had ties to Trump’s campaign, national media outlet have reported that Trump has been vying to replace Sessions – additionally citing his unhappiness with Session’s handling of the investigation of Hillary Clinton’s emails.

Removing Sessions from his seat as attorney general, could open up the position to Pruitt, who was recently criticized for his travel costs use of security detail and other questionable use of tax payers money.

But on Friday, Trump stated that talk of replacing sessions with Pruitt was merely fake news.

“Do you believe that the Fake News Media is pushing hard on a story that I am going to replace A.G. Jeff Sessions with EPA Chief Scott Pruitt, who is doing a great job but is totally under siege? Do people really believe this stuff? So much of the media is dishonest and corrupt.”

As of Wednesday Sessions was still the United States Attorney General.

After speaking to law enforcement and Border Patrol officers, at the Southwestern Border Sheriff’s coalition, he was scheduled to return to Washington D.C.

Dona Ana County Sheriff Enrique, “Kiki” Vigil said that while he’s heard that other Sheriff’s along the Texas-Mexico border have had some problems, in New Mexico there is not a crises as Sessions and the Presidential administration has implied.

There are other issues that we need to take care of here first,” Vigil said. He added that with modern technology that can secure the border without National Guardsman. “The wall is going to take a lot of money, that will take a lot of money. You know why not put that toward helping those with mental illness, our schools and fixing our infrastructure. I don’t support the wall.”

“Not from my office we are not immigration officers we are here to protect everybody. “

From Presidio, Texas, County Sheriff Daniel Dominguez argues that having a wall will help in many ways as well as additional funds and technology.

“On the border, where we are short handed we could use the extra resources,” Dominguez said. “By doing so we can slow it down – it won’t stop it – but it will slow it down.”

Dominguez said the assistance of the National Guardsmen would also assist his deputies.

“They are tied up most of the time in the office and they can’t be out there in the field,” Dominguez said. “So they can come down here (Presidio) and alleviate the pressure.”

The conference was held at the Ramada Las Cruces Hotel and Conference Center, 201 E. University Avenue.