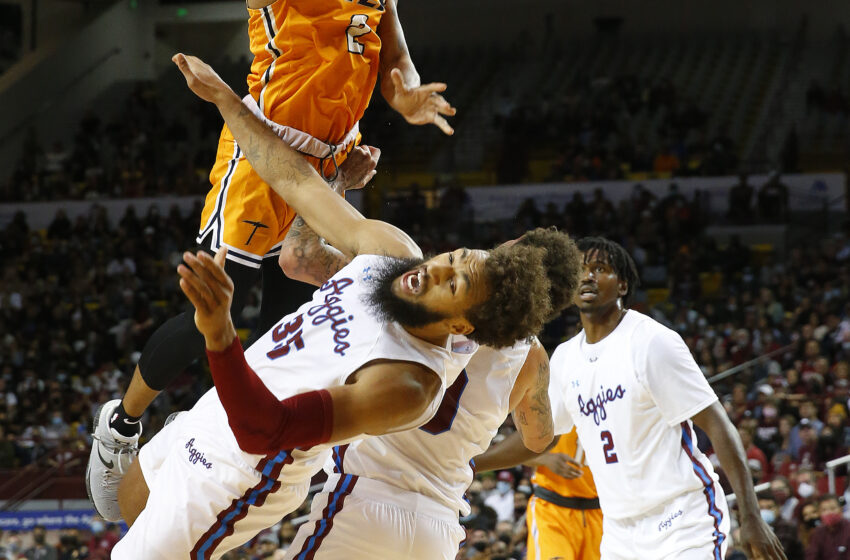 LAS CRUCES – Souley Boum made his 2021-22 debut after recovering from an injury to tally a game-high 23 points and Jamal Bieniemy (13 points) and Keonte Kennedy (13 points) joined him in double digits, but the UTEP men’s basketball team’s (1-1) frantic rally fell short in a narrow 77-71 setback at New Mexico State (2-0) Saturday evening.

It was a five-point game (35-30) at the half and a nine-point affair with 11 minutes left before NM State ripped off nine straight points on the way to eventually leading by 19 (70-51) with 7:38 to play. It was still a 17-point differential (74-57) with 4:35 left before the Miners made their move. UTEP ripped off eight straight points to close within nine, eventually whittling It down to six before running out of time.

“New Mexico State is a really good team and has a coach that is one of the best in the country” UTEP head coach Joe Golding said. “I thought our guys competed. We’ve been on this journey for six months, and they’ve been on it for a heck of a lot longer. I thought there was a four or five minute stretch there where a seven, eight point (Aggie) lead goes to 19. I loved the way our guys competed the last five minutes and got it to a two-possession game.”

NM State opened up the game on a 7-3 push before the Miners answered with their own 7-3 surge to pull even at 10 with 13:06 to play in the first half. The two sides traded scores over the next four minutes before the Aggies heated up from distance to fuel a 10-0 run to put UTEP down by 12 with 5:36 remaining in the first half.

The Miners didn’t flinch, but began to claw back into the contest. It started at the free throw line with four straight makes between Bieniemy and Tydus Verhoeven (eight points). After a hook shot from NM State’s Yuak Alok put UTEP down 10, Bieniemy drilled a sweet pull-up jumper to cut it to eight.

The Miners then got a stop before Keonte Kennedy connected on a corner triple, their first of the game, to make it a five-point contest (33-28) with 1:10 left.

Scores from each side kept it a five-point differential (35-30) in favor of the home side heading into halftime.

NM State extended the differential to 10 early in the second half, but UTEP worked it back down to seven on a pair of occasions. The second time was courtesy of a Jamari Sibley offensive putback.

The Aggies calmly ripped off five straight points to match their then largest lead of 12 (54-42) before Boum ended that with a driving lay-up with 12:07 to play in the contest.

It was a nine-point game (56-47) 50 seconds later before NM State delivered a game-altering 9-0 surge to put the Orange and Blue down by 18 (65-47) with 9:11 to play in the contest. The Miners refused to quit, though, fighting furiously to get it down to a two-possession game before the Aggies held on.

“We have to continue to get better,” Golding said. “The good thing about basketball is that the page turns quick.”