Alejandro Sanz’ La Gira tour returns to the United States this October, with a date set for the Sun City.

With a show produced by Live Nation, Spain’s most international artist will visit 12 cities across the country to present his greatest hits as well as songs from his 3 time Latin Grammy winning and Best Latin Album Grammy winning album, El Disco.

Prior to the postponement of live events, La Gira had sold out countless shows in Spain, the United States, Mexico, Argentina, Chile, Perú, Uruguay, Ecuador, and Paraguay.

Since the beginning of the pandemic, Alejandro Sanz has maintained a particularly close relationship with his fans. Back in March 2020, Sanz was one of the first artists to offer a show streamed through a digital platform-La Gira Se Queda En Casa alongside Juanes has been viewed by nearly 5 million people around the world.

A week later, on March, 21st , Sanz released El Mundo Fuera, a song that gave way to a documentary of the same title. More than 4,500 videos were received through aplatform that allowed people all over the world to share their pandemic stories, ultimately creating the largest collaborating project by a Spanish-speaking artist.

El Mundo Fuera was Spain’s most sold music DVD of 2020, and it is available now on Amazon Prime Video.

To wrap up a historic year, Sanz offered a streaming concert live from Madrid, enjoyed by hundreds of thousands of fans around the globe.

Tickets will go on sale this Thursday, April 29 th at 10:00 am through www.alejandrosanz.com and ticketmaster.com 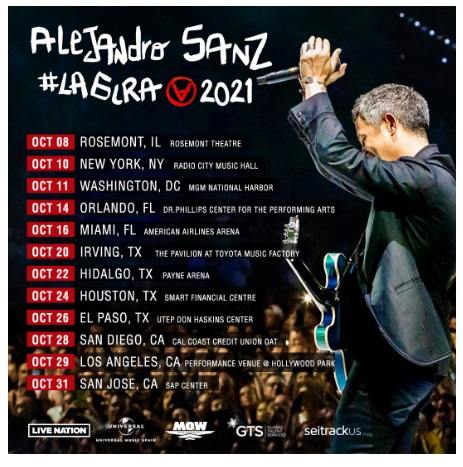 TxDOT Closures for the week of August 7th, 2022

Chihuahuas come out with

Chihuahuas come out with