The Golding era will commence on Tuesday, Nov. 9 against Western New Mexico in the Haskins Center on the newly designed floor. UTEP will then renew its rivalry at NM State in the Battle of I-10 for the first time in two years on Nov. 13.

“We have set up a very exciting and challenging schedule for this upcoming season,” Golding said. “We will be tested in nonconference play each night we take the court that will prepare us for conference play. I look forward to the challenging Conference USA schedule. We have the upmost respect for every player and coach in this league. I’m also looking forward to playing at home in the Don in front of the best fans in the country! We will need Miner Nation there to defend home court this season. The players and myself can’t wait for November 9 to get here!”

The Miners will play a total of 17 home games – eight nonconference and nine Conference USA contests. Following its matchup against the Aggies, UTEP will host Northern New Mexico on Nov. 16.

UTEP will play three games in the Golden Turkey Classic. The Miners will play at Pacific (Nov. 19) and will then return to the Sun City to host UC Riverside (Nov. 22) and Florida A&M the night before Thanksgiving on Nov. 24.

The Miners and Aggies’ second rivalry contest is set for Friday, Dec. 3 in the Haskins Center.

UTEP will then hit the road for a pair of games. The first will be against Big 12 power Kansas on Dec. 7 in Kansas City, Mo., and the second at rival New Mexico on Dec. 12.

UTEP will host McNeese State on Dec. 16 prior to the return of the WestStar Don Haskins Sun Bowl Invitational. The Miners will open the 59th annual invitational against NC Central on Dec. 21, and will then play the winner of the Bradley-Sam Houston State game on Dec. 22 before league play.

The Miners will open C-USA action at UAB on Dec. 30 and at Middle Tennessee on New Year’s Day. The first conference home games are against LA Tech (Jan. 6) and Southern Miss (Jan. 8).

Game times, and streaming/television coverage will be announced at a later date.

Returning for the Miners is the team’s leading scorer Souley Boum. The Oakland, Calif., product averaged 18.8 points per game, while ranking third in the league. Boum was named to the All-C-USA third team after leading the conference in made free throws (130). He also ranked eighth in free-throw shooting percentage (81.2). 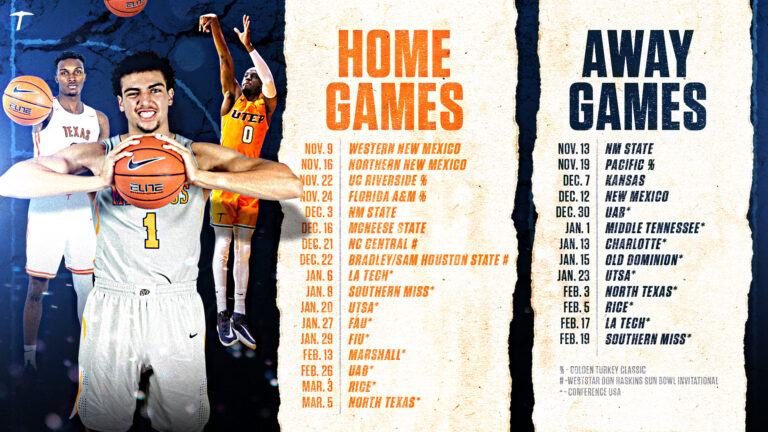