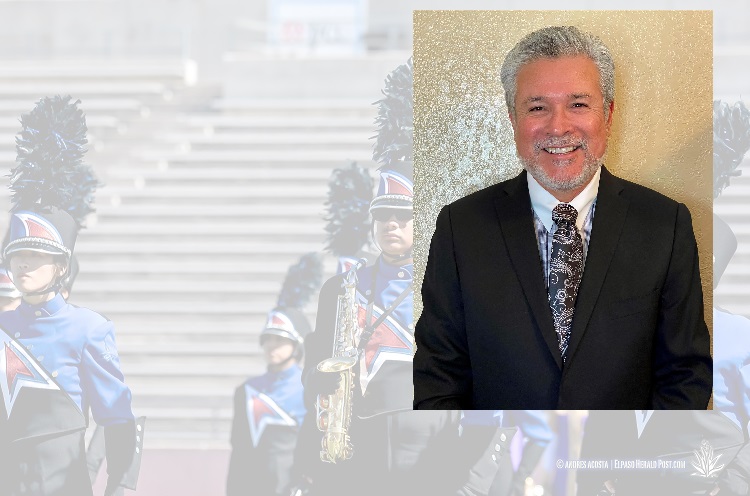 The Socorro Independent School District educator was one of three in the state to be selected for the award which recognizes individuals for their significant contributions to music education in their roles as Texas band directors.

Vega said receiving the award is certainly a high point in his career as a music educator and he is grateful to SISD for supporting him and the district’s fine arts department.

“I am truly humbled,” Vega said. “I’ve had a great career and it’s been an awesome ride.”

Vega is the fifth band director in El Paso to receive the honor and he joins an elite group of 64 directors statewide who have received the award.

In San Antonio, Vega accepted the Meritorious Achievement Award in front of thousands of band directors from throughout the state and was also invited to attend the TBA president’s reception in the company of his wife, who he said has supported him throughout his career.

Vega is a charter faculty member at Americas High School, serving there since the school opened in 1996.

Being part of SISD has been rewarding because music programs across the district are supported, Vega said.

He first started his career at Ysleta Independent School District. He was the band director at Bel Air High School, where he helped the program evolve successfully.

In his time with the Socorro district, Vega has led the Americas High School band to become the first SISD team to win at the New Mexico State University Tournament of Bands and has gone on to qualify to multiple UIL state marching band contests. His programs have produced numerous All-State musicians and successful music educators.

“His humbleness, passion, and love for his craft is evident through all the successes his students have achieved,” said SISD Fine Arts Director Armando Martinez. “It is only fitting that Mr. Vega’s contributions to music education be recognized across the state.”

For all things Americas and Socorro ISD, click here; for our previous coverage of the district, click here.