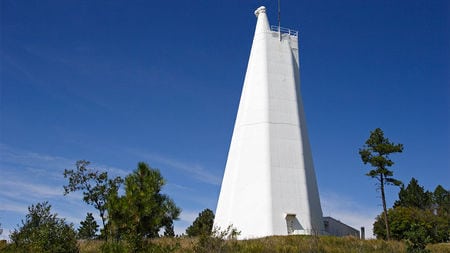 On September 6th, the Association of Universities for Research in Astronomy (AURA), in conjunction with the National Science Foundation, closed the Sunspot Solar Observatory at Sacramento Peak, New Mexico.

With FBI on sight due to an unnamed security threat, all personnel and onsite residents were evacuated, and the local post office was also shut down.

A statement to the public was all the information that was given at the time.

Thank you all for your patience while the closure at Sunspot Observatory is resolved. Our other facilities remain open and NSO is operating as normal. AURA – our management organization – is addressing a security issue at Sunspot Observatory at Sacramento Peak, New Mexico and has decided to temporarily vacate the facility as a precautionary measure.

With no further information having been released, the theories were all over the map with everything from a terrorist plot to an armada of alien ships having been spotted near the sun.

On Monday, however, all of that changed. The residents that vacated their homes will now be returning and all employees will also return to work this week, according the a newly released statement.

AURA has been cooperating with an on-going law enforcement investigation of criminal activity that occurred at Sacramento Peak. During this time, we became concerned that a suspect in the investigation potentially posed a threat to the safety of local staff and residents. For this reason, AURA temporarily vacated the facility and ceased science activities at this location.

The decision to vacate was based on the logistical challenges associated with protecting personnel at such a remote location, and the need for expeditious response to the potential threat. AURA determined that moving the small number of on-site staff and residents off the mountain was the most prudent and effective action to ensure their safety.

In light of recent developments in the investigation, we have determined there is no risk to staff, and Sunspot Solar Observatory is transitioning back to regular operations as of September 17th. Given the significant amount of publicity the temporary closure has generated, and the consequent expectation of an unusual number of visitors to the site, we are temporarily engaging a security service while the facility returns to a normal working environment.

We recognize that the lack of communications while the facility was vacated was concerning and frustrating for some. However, our desire to provide additional information had to be balanced against the risk that, if spread at the time, the news would alert the suspect and impede the law enforcement investigation. That was a risk we could not take.

At this time, the exact nature of the criminal activity has not been released. However, anyone planning a trip up there can likely expect an increased security presence while visiting the observatory for some time to come.