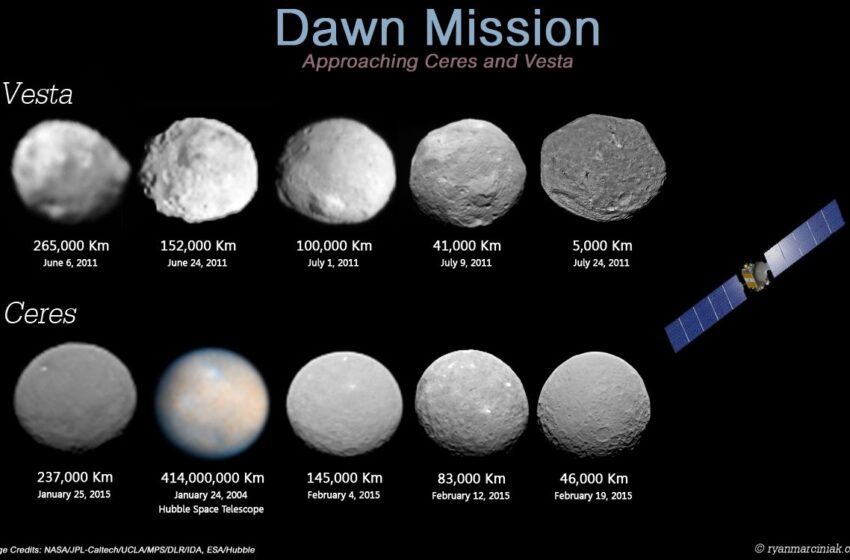 Launched on September 27, 2007, the Dawn spacecraft is the first probe to orbit two objects outside of the Earth-Moon system .

The $467 million mission has been performing up-close and personal reconnaissance of two of the largest objects in the asteroid belt that lies between Mars and Jupiter: protoplanet Vesta and dwarf-planet Ceres.

Reaching Vesta in July 2011, Dawn discovered that northern half of the 330-mile-wide protoplanet had profusion craters. This surprised scientists because it indicates that the asteroid belt may once have been home to more large objects than initially thought.

Additionally, the probe was able to measure that Vesta is composed of howardite, eucrite, and diogenite. These have been found in meteorites common here on Earth, which makes Vesta the likely source.

In March 2015, Dawn arrived at 590-mile-wide Ceres, the dwarf planet most famously known for its strange bright spots. The probe was able to discover that these areas consisted of salts like sodium carbonate. These deposits were most likely left behind after briny water bubbled up from underground reservoirs where it then boiled off into space.

Given the young age of the salty deposits, scientists believe there is still briny liquid under the surface. This is exciting because it opens the door for a possible future lander to investigate the interior of Ceres by sampling the surface material.

Dawn was able to accomplish these great scientific discoveries because of its superefficient propulsion system. This system generates thrust by expelling xenon ions from a nozzle. Though not very powerful, the craft can reach incredible speeds because its engines can be fired for long, continuous stretches.

However, Dawn isn’t just powered by xenon ions; its smaller thrusters that control its orientation are fueled by hydrazine. Unfortunately, the hydrazine is running extremely low. Once it’s gone, the spacecraft will be unable to make corrections that keep its antennae pointed toward Earth, and JPL will no longer be able to receive data.

The mission team estimates that this fuel will completely run out within the next month, mid-October. Because of its stable orbit around Ceres, Dawn will become a virtual comic-ghost, orbiting the dwarf-planet for the next 50 years, or so.

“Although it will be sad to see Dawn’s departure from our mission family, we are intensely proud of its many accomplishments,” said Lori Glaze, acting director of NASA’s Planetary Science Division.

“Dawn’s science and engineering achievements will echo throughout history.”