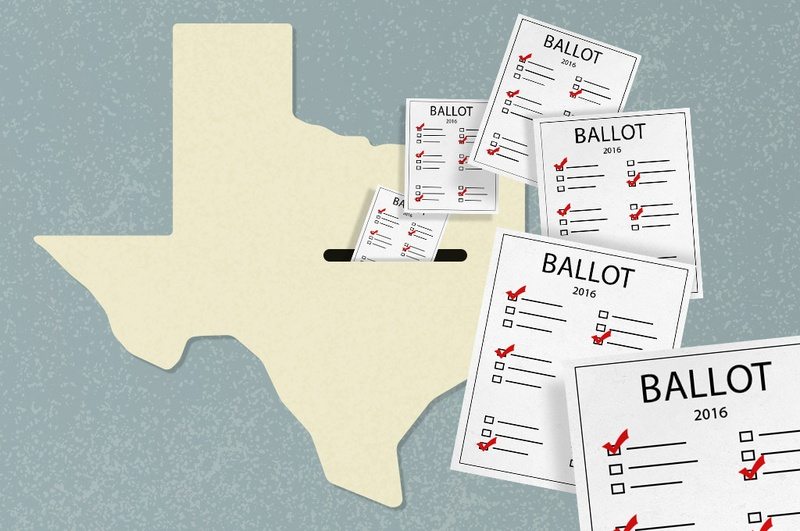 Early voting starts Tuesday in Texas, and the races for the presidential nominations are not — in spite of all that noise they’re making — the only contests on the ballot. Here are the most competitive contests for state and federal seats on the state ballot. *

Ignore the asterisk above at your peril. In every election, there are a few candidates who think they are in dire trouble — or whose friends believe that. And there are always candidates who never know what hit them — and who don’t appear to be in any danger until their chances have been dashed. That’s the disclaimer; now to the primary races (and for reference, here’s a full list of who is on the Texas ballots).

Texas has 36 people in its congressional delegation, and 19 of them have opponents in their own primaries. Uneasy is the crown, etc., but some of these are serious challenges that have attracted outside attention. The highest-profile contest pits longtime U.S. Rep. Gene Green, D-Houston, against former Harris County Sheriff Adrian Garcia, who was on the ballot last year as an unsuccessful mayoral candidate.

The only executive-branch statewide race on the ballot is for an open seat on the Texas Railroad Commission; with seven Republicans and three Democrats, it could easily result in runoffs in both parties.

Different kinds of threats face the three Republican incumbents on the Texas Supreme Court. Debra Lehrman’s opponent, Michael Massengale, was recruited by business and trade groups unhappy with some of her decisions on the court — even though many of these groups helped put her there six years ago. Paul Green hopes to wiggle out of the confusion arising from the name of his opponent, Rick Green. Eva Guzman faces a perennially unsuccessful candidate, Joe Pool Jr., raising a perennial concern about GOP primaries, where relatively unknown candidates with Anglo surnames have sometimes outdone relatively unknown incumbents with Hispanic surnames.

State Board of Education

Three Republicans are running to replace incumbent Thomas Ratliff on the State Board of Education, where he has been a moderate thorn in the paws of some social conservatives. That’s an open seat.

About a quarter of the 31 Texas Senate seats on the ballot this year are getting most of the attention. Two feature incumbent San Antonio Democrats: Carlos Uresti and José Menéndez. Uresti’s opponent is Helen Madla, widow of the former senator from whom Uresti won the seat. Menéndez, meanwhile, is in a rematch against state Rep. Trey Martinez Fischer, the former colleague he beat last year in a special election for the post.

Republicans are battling over two open seats. In Northeast Texas, four candidates, including two House members, are vying for the spot now held by Kevin Eltife, R-Tyler. And in an unwieldy district that includes Abilene, Belton and the heart of the Texas Hill Country, six Republicans are competing to replace Troy Fraser, R-Horseshoe Bay.

One way to watch the 150 races for the Texas House is to follow the numbers instead of the personalities. Contests that flip party labels come later, in the general election. And it’s more difficult to keep score on contests within the parties.

That said, you’ll find a group of Republicans who would like to keep the House rolling in its current direction, with current Speaker Joe Straus at the helm, and another faction that would like to unseat Straus and increase attention on issues dear to anti-establishment conservatives.

Either group can and probably will get some wins, but not enough to bring dramatic change to the House.

What’s left are the 42 current members of the Texas House who face opposition in their own primaries, a group that includes 15 members who have both primary and general election opponents.

The first lesson is that there’s not nearly as much competition for these seats as you might think, or wish. The second is that not all opponents are scary. About half of those incumbents appear to be in recognizable trouble.

That group includes a number of Republican members who have been targeted by one faction or another. On the establishment side, that includes Republicans Byron Cook of Corsicana, Dan Flynn of Van, Charlie Geren of Fort Worth, John Raney of College Station,John Frullo of Lubbock and Jason Villalba of Dallas. On the anti-establishment side,Jonathan Stickland of Bedford, Molly White of Belton, Tony Tinderholt of Arlington andMatt Rinaldi of Irving are all on high alert.

Other incumbents worth watching on the Republican side include Marsha Farney of Georgetown, John Cyrier of Lockhart, Stuart Spitzer of Kaufman, Paul Workman of Austin and Debbie Riddle of Tomball.

Democrats aren’t shut out of the worrying. Put Ron Reynolds of Missouri City and Sergio Muñoz Jr. of Palmview on your lists, too.

Stir those 16 open seats into the mix, along with two weeks of advertising and campaigning by the remaining presidential candidates. Go vote. And then get the popcorn ready. We’ll know what happened in a couple of weeks.

Correction: Thomas Ratliff is not seeking reelection to the State Board of Education.