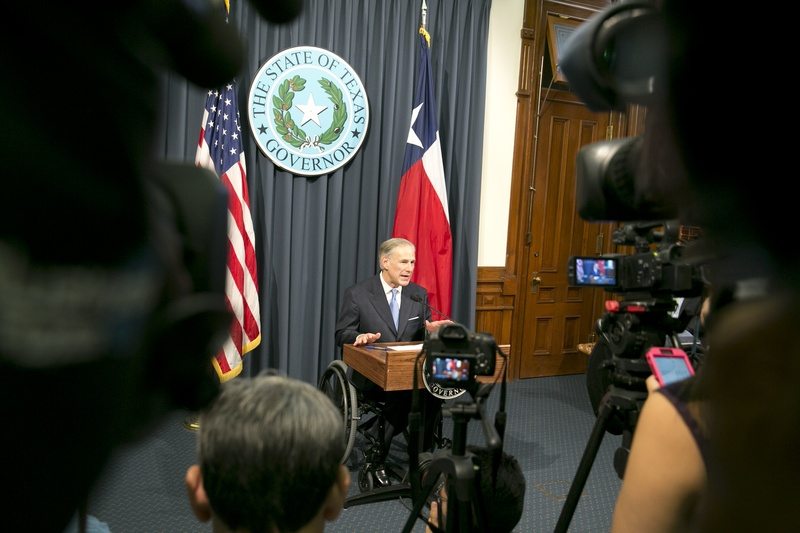 Gov. Greg Abbott is doing in advance of the special session what Lt. Gov. Dan Patrick did at the beginning of the regular session: laying out a bunch of priorities, setting the agenda.

The governor is fiddling with something interesting here — using a special session as a way to focus an unfocused Legislature, to force them to work on his issues instead of issues of their own, to sidestep some of the parliamentary landmines that scramble the minds of all but a few of the Capitol’s wizards, to get things done.

Abbott started with a rule of his own, telling the Senate to pass the legislation that forced him to call a special session in the first place — a “sunset” bill that will extend the lives of a handful of government departments that would otherwise die, including the doctor-licensing Texas Medical Board. Once the Senate has temporarily mended its hostage-taking ways, the governor has promised to add 19 issues to the agenda, including lavatory legislation and property tax caps, that were the primary reasons for the Senate’s obstinacy.

The session hasn’t started yet — it hasn’t officially been called. But Abbott, after suffering the frustrations of the first six months of 2017, finally has the wheel.

Special sessions and their governor-driven agendas are nothing new, but it’s interesting to watch in the hands of a relatively new governor. Abbott took office in January 2015; this is the first special session he’s ever called.

He said at the outset what the issues would be. Now he’s trickling them out again, one at a time, naming the bill authors, picking his favorites and giving them each a moment in the gubernatorial spotlight.

There’s some stagecraft at work here, too. Lawmakers can always file bills that aren’t on the governor’s agenda for a special session. They’re

not eligible for consideration, but filing is a way to shine attention on something and to try to get the governor to add it later. But lawmakers can’t file any bills until the official proclamation of a special session is released. Abbott hasn’t released that and is using the time available to bring a little more attention to the things he wants done.

He got a bellyful of lawmaker filings earlier this year. He’s going from a legislative session where more than 6,000 bills were filed and considered and passed or killed in 140 days, with or without his input, consent, guidance or knowledge, to a 30-day special session with an agenda entirely in his hands. Quite the luxury.

For a guy who’s been trying to extend the control of his office, this could be addictive. Two years ago, he got his fingers deeper into the budget than his predecessors, successfully (for now) challenging a limit on what is and is not within a governor’s veto power when it comes to state spending. Line-item vetos are allowed in Texas, but Abbott reached into “riders” — descriptive texts directing agencies on just how to spend the money appropriated in the budget. Before Abbott, those parts of the budget were considered out of reach.

Abbott is lately picking the pockets of cities and counties, joining with the Legislature to weed out local ordinances he doesn’t like in favor of overarching state laws. During this year’s regular session, ride-hailing regulations approved by voters in Austin and by elected city councils elsewhere in Texas were run down. Texting-while-driving laws, a regular feature in local statutes, are new to state law; one of Abbott’s special-session items would strike those local ordinances now that the state has stepped in. The property tax restrictions so dear to Abbott and the Senate (and to at least 77 percent of the state’s voters, by the way, according to the latest University of Texas/Texas Tribune Poll) would require local governments to ask voters before raising taxes more than a small amount.

It’s safe to say local officials across the state are unhappy with the state’s ambitions.

And now the governor is getting his first taste of really and truly bossing the Legislature around. It’s a turn from regular sessions, where his handful of “emergency items” gets no more attention than the legislative package of any relatively powerful legislator. Abbott was successful with most of his pets earlier this year (his call for ethics reform got only a muted reply), but compare that to Patrick, who listed 30 items and put at least two dozen in the bank.

Now it’s Abbott’s turn: He’ll be in for the usual surprises when the session starts and the legislative animals chew up the furniture and tear up the lawn, but the lead-up has been going well. The governor looks like he’s in charge, for perhaps the first time this year.