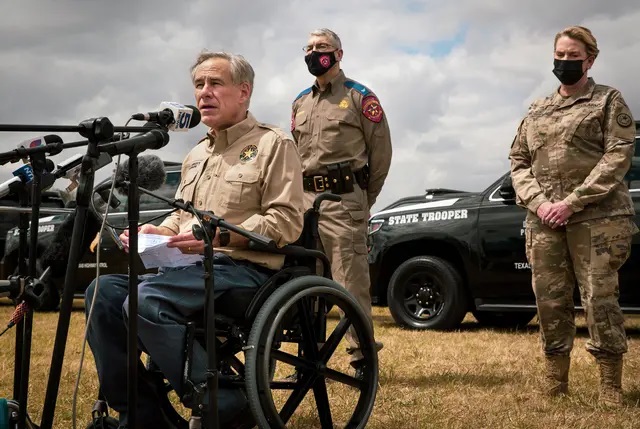 Gov. Greg Abbott talks about border security at a news conference at Anzalduas Park in Mission on March 9, 2021. Abbott, who earlier this month reversed his own requirements for social distancing in public places and mask-wearing, followed that announcement with news conferences on the border and in Dallas. Credit: Jason Garza for The Texas Tribune

It’s clear that there are more people trying to get across the border between Mexico and Texas, that state officials are concerned about increases in human trafficking there and that the state’s Republican politicians are trying to pin those troubles on the country’s Democratic president.

It is not at all clear that the people of Texas are more at risk of catching COVID-19 from a migrant than from anyone else they run into right now. But it’s become convenient to tag people from other countries as scary carriers of the pandemic.

That rhetorical link between immigrants and disease isn’t a new one, but it’s an insidious one. There’s no evidence to back it. It comes from the same bucket of political swill as Donald Trump’s effort to paint refugees coming through the southern U.S. border as murderers and rapists.

Gov. Greg Abbott, who earlier this month reversed his own requirements for social distancing in public places and mask-wearing, followed that announcement with news conferences on the border and in Dallas, adding fears of spreading the pandemic to his concerns about the rising tide of immigrants crossing and trying to cross the state’s southern border.

There is no denying the pressures at the border. And there’s also no evidence to label those people coming into the U.S. as COVID-19 spreaders. It’s a dirty trick common to nativist politics, particularly at a time when racial tensions are at a peak.

Political provocations are rising, too. U.S. Rep. Chip Roy, R-Austin, reacted to Tuesday’s slayings of six Asian women in Atlanta by deploring the crimes and then adding pain to the grief with a reference to lynching.

“The victims of race-based violence and their families deserve justice, and as the case for what we’re talking about here with the tragedy of what we just saw occur in Atlanta, Georgia,” he said. “I think there’s an old saying in Texas about — find all the rope in Texas and get a tall oak tree. You know we take justice very seriously, and we ought to do that— round up the bad guys,” he added.

Words like this make it harder to address the hate crimes that prompted Roy. Adding slights about the coronavirus makes it harder to unwind the almost overwhelming tangle around immigration policy, as it did a year ago with the former president and some of his followers labeling the pandemic as a product of China, stirring nativist politics into a public health crisis that needed undivided attention.

The people who are supposed to be solving problems like these are making them harder to solve, creating new problems as they try to burnish their political popularity.

Democrats are fretting loudly, but even some Republicans, like Texas GOP Chair Allen West, think Roy went over the line. While saying the Democrats were making “mountains out of molehills,” he said, “My recommendation to Congressman Chip Roy would be to engage the brain before firing the mouth, it would avoid embarrassing situations such as this.”

It all makes former President George W. Bush’s brand of Republican politics seem retro. In an interview with The Texas Tribune’s Evan Smith at the opening of this year’s SXSW Online 2021 festival, Bush said he delayed publication of his new book, “Out of Many, One: Portraits of America’s Immigrants,” for fear it would worsen the political differences blocking immigration reform.

“If I’d have been a more of a selfish guy, I would have tried to get the book out before Christmas of last year in order to enhance sales,” he said. “But I wanted to avoid the election season, because one of the problems is immigration has become overly politicized, and it’s really a rebuke of Congress’ inability to come together to get something done on immigration.”

Democrats have criticized some proposed changes to the state’s election laws — some of which are up for debate in the Texas Legislature on Monday — saying those would make it harder to vote and would disproportionately affect voters of color. Legislation on police reform and financing, sparked by demonstrations that followed the killing of George Floyd in the custody of Minneapolis police and by other incidents of police violence against Black and Hispanic people, is pending in Austin. And later this year, lawmakers will redraw political lines for the state Legislature and the congressional delegation — an issue that turns on demographic data and communities.

Those debates would be tough in any political environment. Fanning racial, ethnic and national differences has derailed immigration reform for more than a decade. It might work for campaigns, but it’s a lousy way to govern.