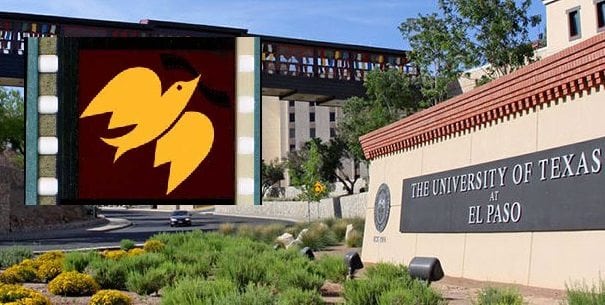 Ivan Guardado does not consider himself a victim, but he holds The University of Texas at El Paso responsible for his current predicament. The El Paso native originally was interested in a forensic science career, until he took an introduction to film class and he was bitten by the movie bug.

The El Paso native has become passionate about all things having to do with film. He has helped produce some student productions, become president of the University’s Film and Cinema Society, and looks forward to his upcoming volunteer work at the 18th annual Binational Independent Film Festival that will screen features, student films and documentaries starting May 17, 2018, in UTEP’s Union Cinema on the first floor of Union Building East.

Guardado, a sophomore digital media production major, and several other film society members plan to take tickets and serve as ushers during the festival, and he looks forward to networking with others interested in all aspects of cinema.

“Our goal is to expand the film industry in El Paso and this film festival will help with that goal,” he said. To have a film festival of this size in El Paso is fortunate because it draws attention to the level of talent here. My hope is that it will help start an artistic renaissance.”

The screenings of English and Spanish-language films and documentaries will begin at 7 p.m. The features will be introduced by film artists, educators or community advocates who were involved in the productions or are familiar with the subject. Those speakers will be available to speak with the audience after the presentations.

The exception will be Monday, May 21, because UTEP student films will be screened at 6 p.m. as part of a competition that will be judged by Troy Scoughton, Sr., a member of the Producers Guild of America. Scoughton will discuss his film, “Virus,” after the evening’s screening. The Union Cinema will open at 5:30 p.m. that day.

The festival will begin with a 7 p.m. screening of the 1976 drama “Leadbelly,” about the life of African-American blues singer Huddie Ledbetter. Organizers will honor the film’s star, Roger E. Mosley, with a lifetime achievement award before the screening. The festival will close with a screening of the 1985 Spanish-language horror film “Terror y Encajes Negros” (Terror and Black Lace). It will be shown with English subtitles. The movie’s lead actress, Maribel Guardia, will be honored with the Beauty of Mexican Action Cinema award before the film is shown.

Zamora, a native of Chihuahua, Mexico, who became a U.S. citizen and served with the Army, said the festival will include the best and freshest examples of U.S. and Mexican independent cinema.

“We have some good ones this year,” Zamora said. “But then again, we always do.”

“People support this festival because it brings independent filmmakers from all over the world to our border region, and because it truly is a bilingual and binational event,” he said.

The Los Angeles-based artist, who juggled festival planning with the opening of his latest production, “The Line that Divides,” said that proceeds from the UTEP portion of the festival will go to the University’s Film and Cinema Society.

The festival also will screen the 2017 documentary “They Call Me King Tiger” at 10 a.m. Monday and Tuesday, May 21 and 22, at the La Fe Culture & Technology Center (721 South Ochoa Street) and at the El Paso Main Library (501 North Oregon) respectively. The film tells the story of Reies Lopez Tijerina, considered a leader of the Chicano movement in the 1960s, and the Hispanic struggle for civil rights.

Alberto “Beto” Lopez, assistant vice president for University Relations, helped Zamora bring the festival back to UTEP. He considered the event the latest example of alumni who want to give back to the University in some way whether it be financial or through their expertise.

“I think it’s great that our alums have a desire to come back,” Lopez said. “They give of themselves. They give their energy. It’s inspiring to our students who may want to follow in their footsteps.”

Many of the same films and documentaries will be shown at the festival’s sister site, El Cinito, in downtown Juárez, Mexico.

General admission tickets are $7.50, and students, seniors and those with military ID can pay $4.50.