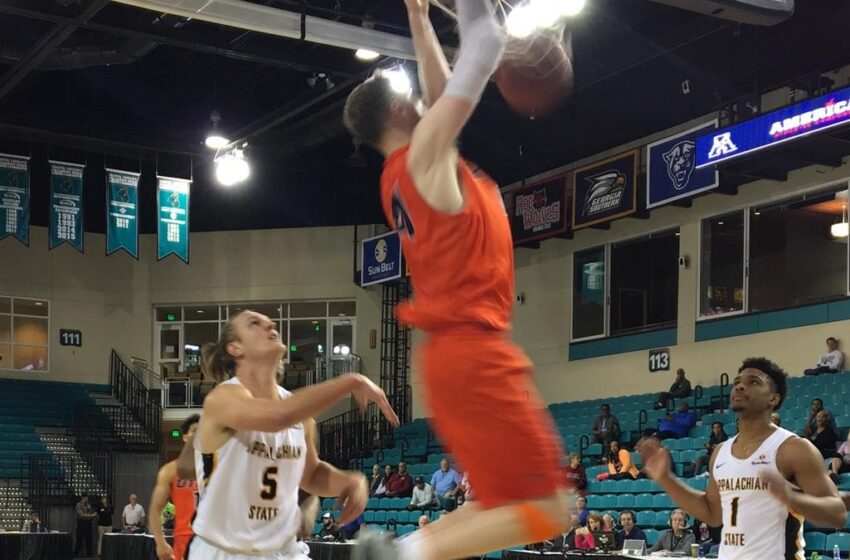 UTEP erased a 14-point deficit with a 22-2 run to start the second half, but Appalachian State made the big plays down the stretch in a 76-72 victory over the Miners on Sunday morning at Myrtle Beach.

The Miners (1-3) dropped three games at the Puerto Rico Tip-Off, with two losses coming by a total of six points.

“I’d like to congratulate App State.  I thought they played really well,” UTEP coach Tim Floyd said.  “They shot the ball exceedingly well in the first half, making eight threes.  We didn’t close to them very well.  We did a much better job in the second half of guarding the three-point line.  We did a much better job defensively in the second half.”

Appalachian State (3-2) shot 8-for-18 from outside in the first half in surging to a 42-28 lead.  But UTEP opened the second half with 16 unanswered points, including a couple of three-pointers by Keith Frazier, to take its first lead at 44-42.

After the Mountaineers’ Justin Forrest tied the game with a couple of free throws, the Miners scored nine of the next 11 and took their biggest lead of the day, 53-46, on another three-pointer by Frazier with 12:38 to go.

The Miners still led by seven (60-53) with a little over eight minutes remaining before Appalachian State mounted its comeback.  The Mountaineers tied it at 62 with 5:52 remaining on a layup by Ronshad Shabazz, and went ahead for good (67-66) on a three-pointer by O’Showen Williams with 4:19 left.

After Appalachian State instated a five-point lead (73-68) in the final minute, the Miners pulled within two (73-71) when Omega Harris was fouled on a three-point attempt and made all three free throws.  Shabazz missed two foul shots, and Frazier went to the line with a chance to tie it with eight seconds on the clock.  He made the first and missed the second.  Williams converted two free throws to make it 75-72.  The Miners’ last chance to cut into the lead ended when Isiah Osborne missed the front end of a one-and-one with four seconds remaining.

“There are some great lessons to be taken for our team, one being down 14 going into the second half and being able to close it in a four-and-a-half minute period just by simply defending, getting back on defense, guarding and not turning it over,” Floyd said.  “[We had] some costly turnovers in the first half.  I thought they kicked us around on the glass on both ends all night.  Their guard play was terrific between Williams, Forrest and Shabazz.”

Frazier scored a game-high 25 points after originally being ruled out with a foot injury.  Matt Willms added 18 points and Omega Harris had 10.

Williams scored 19 points, Shabazz 12 and Craig Hinton 11 for Appalachian State.  Forrest had 10 rebounds as the Mountainers dominated the Miners on the glass, 43-29.

The Miners scored 25 points off turnovers (21 in the second half), helping to neutralize the Mountaineers’ 10-for-27 night from downtown.

“We’re growing as a basketball team, still trying to figure out combinations,” Floyd said.  “We’ve got a couple of guys really banged up.  We’re a couple of free throws missed from having a chance to be 3-0 in this thing, and we didn’t get that accomplished late by stepping up to the line and just making one.  If Keith makes his last one, it’s a tie ballgame and a different game in terms of how you’re going to play.  But anyhow, that’s not the case.  We’re 0-3 in this thing and the road gets tougher for us.  We go back and play some really quality teams both at home and on the road.”