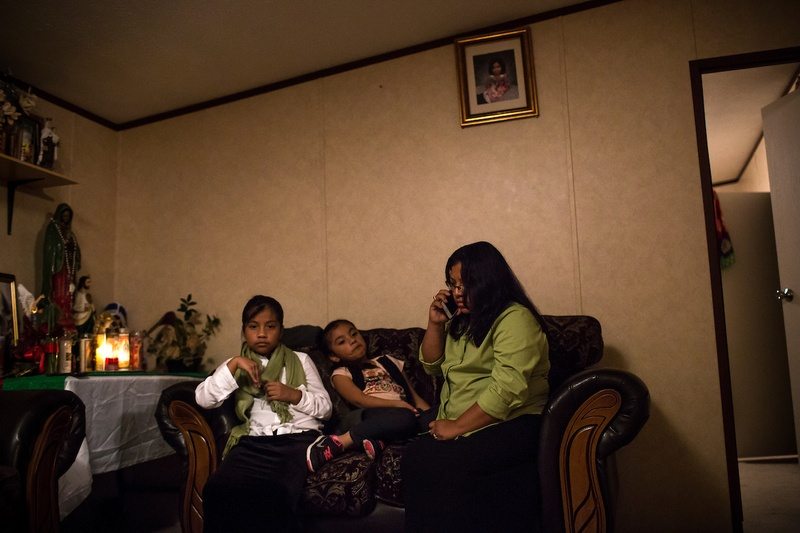 Undocumented immigrant Miguel Angel Torres was on his way to deliver Valentine’s Day chocolates to his daughter last week near Austin. Now, in what his family calls a case of mistaken identity, Torres is in an immigration lock-up near San Antonio.

With Donald Trump in the White House and rumors of widespread law enforcement raids percolating throughout her heavily immigrant community in North Austin, Irma Perez said she decided to help pay off her brother’s unpaid tickets to help him avoid any trouble.

It would lead to her own family’s undoing.

On Friday, Perez got a call from a neighbor with disastrous news: Her husband — not her brother — got picked up by Immigration and Customs Enforcement after dropping off their three daughters at school in Pflugerville.

What began as an apparent case of mistaken identity soon mushroomed into a full-blown family crisis. Their dreams of opening a food truck in North Austin were dashed, and the family abandoned their home because it was now on ICE’s radar. On Monday, their girls, all U.S. citizens, were on their way to an immigrant detention facility in Pearsall, 150 miles from Austin, to see their father.

Miguel Angel Torres, who has lived in Austin for 14 years as an undocumented immigrant, worked as a cook at an Austin restaurant. Perez, his wife, is also undocumented, and so is her brother, Jose Manuel Perez.

Torres was one of an undetermined number of people detained in Texas in the past few days as part of national ICE operations that sent panic through immigrant communities. In a written statement released to reporters Monday, Homeland Security Secretary John Kelly said that ICE, in “targeted” operations last week, detained more than 680 individuals nationwide, 75 percent of whom had criminal records, including homicide and sexual abuse.

“These operations targeted public safety threats, such as convicted criminal aliens and gang members, as well as those who have violated our immigration laws, including those who illegally re-entered the country after being removed and immigration fugitives ordered removed by federal immigration judges,” Kelly said in the statement.

Torres’ family wasn’t expecting him to get caught up in the mix.

“[My husband] is a person who’s never done anything wrong and who complies with the law,” Perez said in her native Spanish. “We don’t know why they detained him. He was driving his own car, not my brother’s. He has nothing to do with my brother.”

On Friday morning, she said ICE officers wearing civilian clothes and driving an unmarked van detained Torres. She said he was on his way to deliver a box of Valentine’s Day chocolates to their youngest daughter when he was stopped by agents who asked if he was Jose Manuel Perez — her brother.

When he said he wasn’t, Irma Perez said, they forced him out of his car anyway and said, “Well, we’re detaining you.”

She says four days before her husband was detained, she provided her own address instead of her brother’s when submitting payment for her brother’s tickets in Manor, a town in Travis County just northeast of Austin.

Lawyers working on her case believe ICE officers waited outside the family’s home thinking Torres was Irma Perez’s brother, who she said had been previously deported.

The Tribune reached out to ICE about the Torres case, and the agency said it was still working on that request as of late Monday afternoon.

The ICE field office in San Antonio, which includes Austin, said Monday the agency detained 51 foreign nationals, 23 with criminal convictions, in the Austin area last week. The Mexican Consulate in Austin reported 44 Mexican citizens were picked up on Thursday and Friday in the Texas capital — a number that included a few whom Consul General Carlos Gonzalez Gutierrez said happened to be “in the wrong place at the wrong time.”

Mark Kinzler, an immigration lawyer who has helped Irma Perez, told The Texas Tribune that “all kind of things look wrong” in the case against her husband.

“They were looking, apparently, for someone else, and he wasn’t that person but then they took him anyway,” Kinzler said.

ICE has criticized immigrant advocates for spreading “false” and “irresponsible” reports of widespread raids in immigrant communities. But Kinzler said the Torres detention fits a pattern of increased enforcement that goes beyond immigrants with criminal records.

“Even though ICE’s PR campaign is that they’re picking up criminals and picking up people with prior deports, and I’m sure some of them are, it already seems like a lot of them are not those people,” Kinzler said. “People who work every day and try to take care of their families are getting swept up [too].”

After the call from the neighbor alerting her to her husband’s detention, Perez said she immediately began looking for him. She and her parents spent hours trying to track him down before she finally got a call from a toll-free number. It was her husband telling her to go pick up the car he left behind.

Ever since, Irma Perez said she has remained close to a phone, waiting for more news from her husband.

“I’m in shock because we always saw this in the news and it only happened to other people,” she said. “It had never happened in my family, and it feels awful because it changes your life.”

Kinzler said they can expect at least two weeks of legal procedures to get Torres out of detention. However, the timing depends on how full the court is.

“Because of the time he’s been here, because he has a clean history and U.S. citizen kids, I will be able to get him out on a bond,” Kinzler said.

Perez said her family will have to start rounding up money to free her husband and pay for attorney’s fees as he fights removal from the country.

Immigration lawyers advised Perez and her family to leave their home since ICE has their address on record. On Friday night, she moved her children and parents, who live with her, into her sister’s house.

Friday was the day Torres was going to open his own food truck, Sabor del Rancho, a dream his family said he’d nourished for years. Now, the trailer sits empty on North Lamar.

The family went to church Sunday and sang in the choir as they regularly do — without Torres, who was supposed to do his first solo performance at church. After mass, Irma and her daughters returned to her sister’s home. Sitting next to a candlelit altar with a statue of the Virgin of Guadalupe, they tearfully retold how quickly their lives had been turned upside down.

Torres’ 12-year-old daughter Melani — who is part of a college readiness program and hopes to become a computer engineer one day — said her father would always drop her off and pick her up from school, so she was surprised when her mother picked her up on Friday.

“I saw her with teary eyes, and she said, ‘You have no idea what happened,'” Melani said, speaking in both Spanish and English during the interview. “I thought she was kidding because my dad would never be caught by ICE, but then our neighbor confirmed the news, and my sisters and I started crying.”