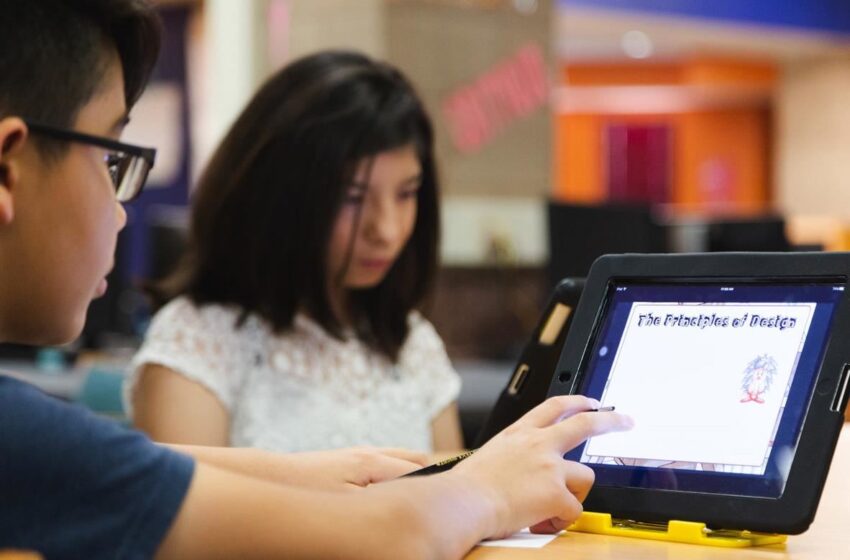 Seventh and eighth grade students at Captain Walter E. Clarke Middle School designed, illustrated and voiced a mobile app that has been published and copyrighted by Apple Inc.

Elements and Principles of Art is the first mobile app of its kind to be published in the app store, according to Apple. The educational tool allows users to learn about art-making components, such as balance, rhythm, contrast, unity, pattern, movement and emphasis, and incorporate them into their own illustrations.

“I am really proud of my students,” Saucedo said. “To have their drawings, voices and designs published is exciting. There are so many things you can do when you combine art and technology, and this will surely open many doors for them.”

The young app developers now are setting their sights on how to improve and update their app. Their goal is to create art appreciation awareness through digital curriculum that can be used worldwide.

“It’s an honor to know that we were part of this because it will help other kids,” said Yedsenery Espinoza, a seventh grader at Clarke Middle School. “They will read the definition of the element and when they see our drawings they will say ‘oh, that’s what it’s supposed to look like.’”

Another student, Jessica Perez, said the experience has built her desire to succeed.

“I never thought something I contributed to would be this successful,” she said. “I want to keep drawing and see where it leads. I did accomplish helping create an app. What makes me think I can’t do something bigger?”

Proud parent Stephanie Michele, said that when her daughter mentioned the app she didn’t think much of it, until she received news that it was published.

“I think it’s amazing that my daughter’s art piece can be viewed by people in different countries,” Michele said. “There are some things I didn’t know about art elements until I downloaded the app. It’s pretty cool that it teaches me, too, and will let them be in touch with people from other countries.”

The free app is available in the App Store for iOS devices. Click here to download Elements and Principles of Art.