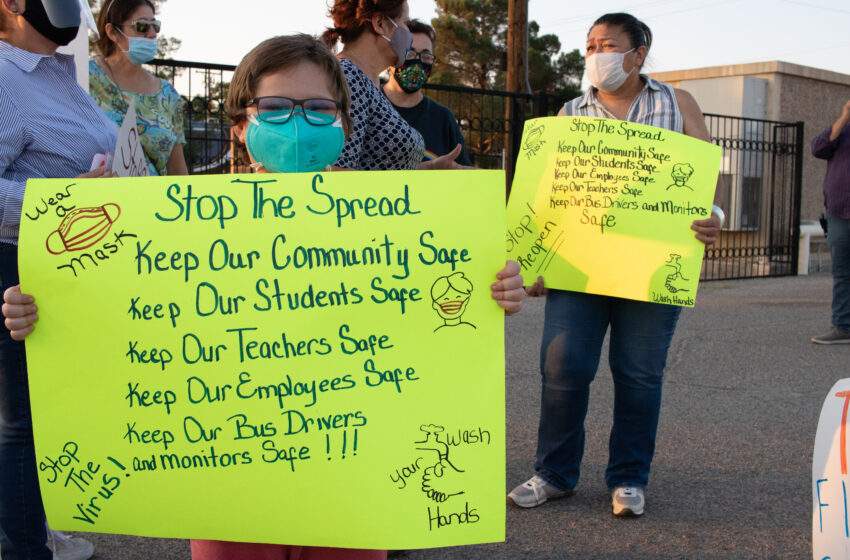 Staff and parents from several districts gathered this week at Ysleta ISD headquarters to demand all area districts maintain distance learning until the El Paso community flattens the curve in coronavirus infections.

The “Standing Unidos for the Safe Reopening of Schools for All” is a series of protests organized by members of unions and grassroots organizations throughout El Paso, local action in solidarity with the nation-wide effort Demand Safe Schools.

The protests are a joint effort that first took place last week at the El Paso Independent School District main office.  Many educators, staff and parents are upset that classes are set fully resume in person, even with Covid-19 surging in the Borderland.

As of Thursday, the positivity rate of infection in El Paso county top at 12.13%, with an average of 37 per 100,000 persons in the last seven days. Additionally, El Paso registered 523 new cases, the largest single-day count since the pandemic started.

In late August, the CDC released school administrators guidelines for a “safe return to school.” Along with it, the CDC created a chart with indicators to specify the level of risk of transmission based on the number of cases. These indicators would define when is “safe” to re-open schools.

Recently, while YISD parents had been encouraged to fill out a questionnaire to determine the learning model they would choose for their children, the district’s staff are left with no options.

Ysleta ISD teacher Diana Duran shared her personal story with the attendee, with tears in her eyes.

In July, her father was diagnosed with a rare type of stage-four cancer, and as she described a that itself has been a “real long-battle.” Duran is the main support system her dad has, and due to the severity of her dad’s treatment, she has to be upfront helping him and being in communication with the doctors.

She said that it makes it more difficult for anyone with any other medical issues to get treated due to the current health crisis.

“We want everyone to know we are not ok with reopening schools…we want to make sure that want we reopen schools is 100% safe to return so we can finally embrace our students,” Duran said.

“Reopening the schools is opening the doors gatherings, and that is one of the guidelines that we must follow, no gatherings, no spreading the virus.”

Throughout the protest, Duran asked the public to wait until cases decline to reopen the schools and  “stay strong and con mucho amor.”

During the peaceful demonstration, some of the organizers encouraged the attendees to vote, as they believe new leadership is needed locally and at a national level.

“We need new leadership, otherwise we will keep up having this struggle after November… we need to put a stop to this,” Alfonso Mendoza, a staff member from El Paso Teachers Association.

Most of the attendees described the in-person instruction reopening as a “betrayal” from the district.

One of the attendees who shared the feeling of “betrayal” was Jesus Guereca, an immigration attorney said he is used to providing a voice to the “voiceless.” This time around, he attended the protest in representing his father, a janitor at the district.

Guereca said he was there to defend his dad, who has worked non-stop for over 30 years, and now he fears his dad’s life.

Luz, who works as a bus monitor for the district, was excited to see the co-workers standing out for this cause.

56-year-old Jorge Guerra has worries that cover both sides of the issue.

Guerra, an EPISD bus driver is a parent as well. He said he worries about his health and well being since he has to check the temperature of all the students who get into the bus. Also, he said that he doesn’t know who carries the virus or if he could be unknowingly carrying the virus and could infect a student.

“The schools are not open yet, and there are already infected…this will create more chaos,” Guerra said.

He added that some students, while they are on the bus, take their masks off, and he fears any of those students would touch him and potentially infect him.

The Aaltonen family showed up in support of the YISD staff wearing face-masks and keeping their distance from the crowd. “Always be safe,” read their sign.

Claudia Aaltonen, a dual-language kindergarten teacher, came down to YISD headquarters in solidarity with her acquaintances in the  district and was also one of the organizers from the first demonstration.

“None of the districts of this city have a solid plan to keep us safe…,and if we are not safe, we need to close up and continue the virtual learning,” said Aaltonen.

Norma de la Rosa, the president of the El Paso Teachers Association, mentioned that the message they want to send is not only meant for local authorities but for state and national, and their only mission is to support the community and not reopen schools until it is safe.

During the protest, a few motorists stopped and yelled in opposition to the protest, with one bellowing “Get a life.”  Other drivers slowed to take pictures of the demonstration and give a thumbs up as a sign of support as they were driving down Ray Watt Drive.

YISD staff who attended the protest said they will be waiting for the district to take action and submit a waiver request to the TEA for continued remote learning as some of the other districts have done it.

However it was one of the teachers who attended the protest, who preferred to remain anonymous, who summed up the event.

The educator said the COVID-19 pandemic had become a political issue and controversial for some, when in fact is a health crisis.

The teacher said they understand the economy is important, but life is “priceless.”

***Editor’s note: On Thursday evening, YISD officials announced that they had applied for a waiver with the TEA and are awaiting  the results. Read that story via this link.