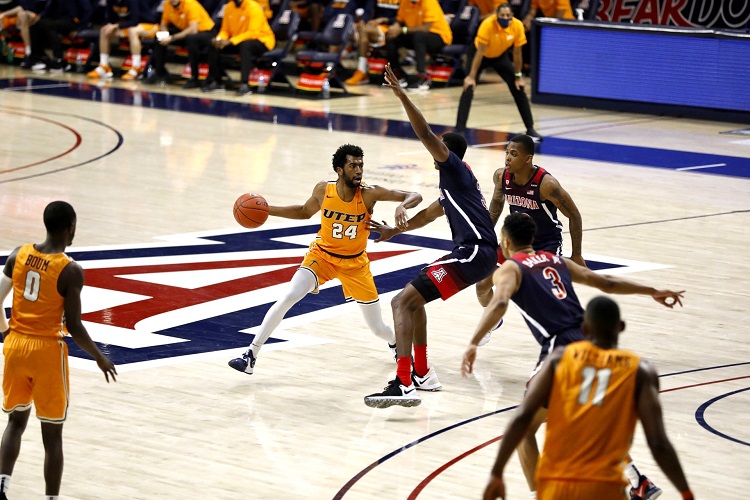 TUCSON, Az. – Efe Odigie buried a jumper on the baseline to get UTEP (2-2) within two points with 2:52 left, but Arizona (5-0) went 4-for-4 from the foul line down the stretch to remain undefeated and claim a 69-61 victory on Saturday night at the McKale Center.

“We kept battling and we weren’t going anywhere. We were going to be here the whole time,” third-year UTEP Head Coach Rodney Terry said. “I love my team, this team’s going to be really good. We’re learning some tough lessons right now through playing some really good competition. We needed a physical game. We can’t simulate this in practice. We try to get physical in practice but you have to get it against really good competition.”

Souley Boum led the way with 16 points, while Bryson Williams hit double figures with 10. However, UTEP ‘s leading scorers finished a combined 8-of-25 from the floor. UTEP shot 40.7 percent from the floor overall, but only 36 percent in the first period.

James Akinjo, who was one of the Wildcats to hit the late free throws, finished with a game-high 18 points. Akinjo was masterful at the foul line, shooting 14-for-14. Bennedict Mathurin led U of A with seven rebounds and chipped in with 13 points.

The Wildcats missed all nine of their three pointers, but outhustled the Miners on the boards, 46-25, and pulled down 18 offensive rebounds in the process. The ‘Cats also shot 25-of-28 from the foul line and outscored the Miners 22-7 on fast break points. Arizona added five blocked shots and six steals.

After a back-and-forth early first half, the Miners took a 17-16 lead after Boum was fouled on a three-point attempt and converted all three free throws with 9:16 to play. The Wildcats answered with a 9-2 run to take a 25-19 advantage. Keonte Kennedy followed with his first bucket of the game at the 3:09 mark to cut the lead to four points (27-23), but Arizona outscored the Miners 8-4 over the last three minutes to take a 35-27 lead into the locker room.

The Miners came out strong in the second half with a 6-0 run. Boum started it with a steal and layup on a fast break, Tydus Verhoeven converted an offensive rebound into points, and a Kennedy layup got UTEP within two points (37-35). However, Arizona went on a 12-4 run to build a 10-point lead at the 14:13 mark.

“We did a much better job in the second half,” Terry added. “We’ve done a great job all year taking care of the ball, but the first half we had nine turnovers. But we turned it around in the second half and only had four to give ourselves a chance to be in position to win the game.”

Arizona built back an eight-point lead (65-57) with 5:05 to go after Azuolas Tubelis converted a layup off an offensive board. The Wildcats then went cold and didn’t score for almost four minutes, letting UTEP get back into the game after the Odigie jumper with 2:52 remaining.

The Miners shot 12-of-15 from the foul line led by Boum’s 6-for-9 effort. UTEP also tallied 10 steals for the second time this season.

Up next,  UTEP will play at another Pac-12 Power on Wednesday, December 16 when it takes on #23 Arizona State (3-2) in Tempe. The contest is sponsored by Pepsi as tipoff is set for 7 p.m. MST in Desert Financial Arena.

The contest can be heard on 600 ESPN El Paso with “The Voice of the Miners” Jon Teicher calling the action. The Miners and Sun Devils will also be shown on the Pac-12 Network. The two schools will meet for the 97th time on Wednesday night.