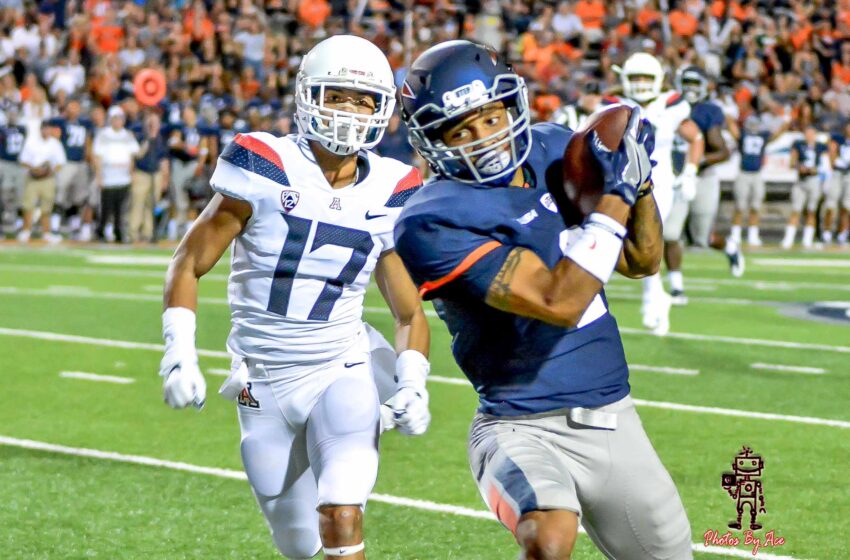 Brandon Dawkins beat UTEP with his arm and legs, amassing 288 yards of total offense as Arizona sent the Miners to a third straight loss, 63-16 in the Sun Bowl on Friday night.

“They’ve got an outstanding running team and it’s fueled by their quarterbacks,” UTEP coach Sean Kugler said. “That guy is a hard charger, he’s a 4.5 kid and he made some people miss. He’s a very talented guy.”

UTEP (0-3) got on the board late in the second quarter on a nine-yard touchdown pass from Zack Greenlee to Tyler Batson. Later, the Miners added a 53-yard field goal by Brady Viles at the end of the half.

Greenlee made the fifth start of his UTEP career and completed 11-of-17 passes for 104 yards with a touchdown. Redshirt freshman Mark Torrez also saw action at quarterback and gave the Miners a spark early in the third quarter. The Eastwood High School graduate engineered a four-play, 76-yard drive, finishing it off with a six-yard rushing touchdown to cut Arizona’s lead to 42-16.

Arizona gained 501 yards, including 326 rushing. The Miners once again had difficulty moving the ball, finishing with 218 yards on 53 plays including 17 yards rushing.

“We didn’t sustain any drives and offensively, we’re not running the ball well. We need to fix that problem,” Kugler said. “What the answers are, we’re going to have to get back to work and try to figure that out. I don’t have that answer for you right now. Ryan Metz is our quarterback. When we get him back from injury again, he’ll be our quarterback. We’ll have to make a decision between Torrez and Greenlee. I did see some good things out of Torrez that I liked, but we can’t turn the ball over, and that one turnover was very costly at that point of the game.”

As far as how to fix the running game, Kugler said “You look at scheme first, whether you’re doing too much or not doing what’s suited for your players. And then you look at personnel. And again, we do have some guys we can look at with [Joshua] Fields and [Ronald] Awatt. But collectively, something has got to change there or we will be in trouble.”

Terry Juniel posted four catches for a career-high 82 yards for UTEP. He was one of 10 players to catch a pass as the Miners spread it around on offense.

Kenyan Foster was a special teams standout for the Miners with four kickoff returns for 94 yards. Defensively, Alvin Jones matched his career-high with 16 tackles while adding two sacks and 1.5 tackles for losses.

The Miners will head up the road to face I-10 rival NM State in the FirstLight Federal Credit Union Battle of I-10 next Saturday (Sept. 23).

Kickoff is slated for 6 p.m. MT from Aggie Memorial Stadium in Las Cruces.