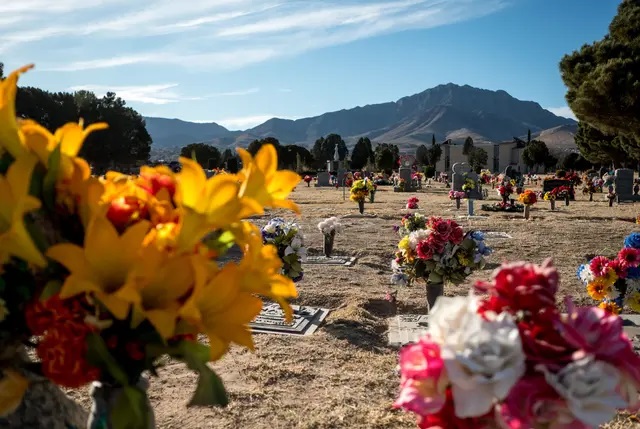 When Cindy Colorado’s mother-in-law died from COVID-19 on Dec. 1 – becoming one of more than 1,300 El Pasoans who have succumbed to the virus in this border town – the family hoped to give her a traditional Catholic funeral.

She learned that the church could have someone pray the rosary at the funeral home, but the funeral home won’t allow more than 25 people to attend a service – and no one under 13. They wouldn’t be allowed to touch the casket or the body.

“Normally we would have a much bigger mass,” Colorado said.

Having to alter generations of tradition has been felt especially hard in this predominantly Catholic community. And it’s placed the Catholic diocese in a position where it is forced to enforce its own safety protocols without isolating parishioners.

“It’s being caught between a rock and a hard place, we really love for people to be a part of the sacraments, including the rite to a Christian burial, the rite to a Christian funeral and the mass and a rosary, and a viewing, which has become a tradition especially in this community,” said Fernando Ceniceros, a spokesman for the El Paso Catholic Diocese.

The pandemic has disproportionately affected El Paso compared to cities of similar or larger sizes. As of Wednesday, there had been more than 91,000 cases recorded in El Paso County, the fourth-highest total in the state. El Paso’s COVID-19-related deaths are higher than larger counties like Travis and Tarrant; out of desperation, the county last month enlisted inmates from the jail to help move bodies at the morgue because staff couldn’t keep up with demand.

The situation has pushed the diocese into a “suspended” status of operations, which means that gatherings inside churches are limited to those needed to facilitate “the celebration or live-streaming of Mass, not to exceed 10 people” according to church guidelines. Weddings, baptisms and other ceremonies also are on hold, along with funerals.

“Being able to minister to those people in their most desperate time of grief and need, it’s very hard to put rules on it,” Ceniceros said, adding that people shouldn’t feel guilty for not being able to attend a service in person. “It’s not like we completely shut down. [But] we’ve shut down what people consider … the most important parts of it, which we feel are the most important parts, the rite to a Christian funeral, which would be the mass.”

The loss of tradition after losing a loved one is compounded by another impact of the pandemic: Many families have fallen on hard times and can’t afford to pay for any kind of funeral. Colorado, a stay-at-home mom, said before her mother-in-law’s death, her husband lost his job as an iron worker and her daughter lost hers from retail store, both because of COVID-19’s effect on the economy.

Her family and hundreds of others in El Paso have applied for financial assistance to help pay for funerals. Colorado said they wanted to have a service for her mother-in-law this week, but will wait until next weekend as they continue to collect money for expenses like an urn and flowers. But she knows they’re still better off than some other local families.

“Some people pretty much just received their loved ones’ ashes, and that’s it,” she said.

Colorado has applied to the county for $2,500 in burial assistance, which is made possible through federal Coronavirus Aid, Relief and Economic Security Act funding. The payment goes directly to the funeral home after arrangements are made by the family.

The county usually provides assistance to about 50 families a year from its own indigent burial program. But it allotted an additional $350,000 in CARES Act funding this year as the deaths started to mount, said Irene Valenzuela, the executive director of El Paso County’s Community Services Department.

As of last week, at least 70 families were in line for funeral assistance, Valenzuela said.

Hundreds more have sought and received funeral assistance through Operation H.O.P.E, a local charity established in 2009. Angel Gomez, the organization’s executive director, said he stopped counting after 520 families applied for help. He said his organization normally would provide assistance for about 12 to 15 funerals a year.

“I have legal pads [with notes]. I lost the first one, but I already filled up another one. And I am starting my third,” Gomez said last week.

He’s tried to talk families out of going with traditional burials, especially if they are already low on funds. Families must come up with about $1,400 out of pocket for a traditional burial even with the charity’s help, he said.

“When you’re not working or you’re working part time, that’s a lot,” he said.

Gomez said his organization has received CARES Act funding from the city, which came just in time. He’s still worried that money won’t help everyone whose names are rapidly filling his legal pads as the pandemic’s toll mounts in El Paso.

How suspension of the Johnson & Johnson...