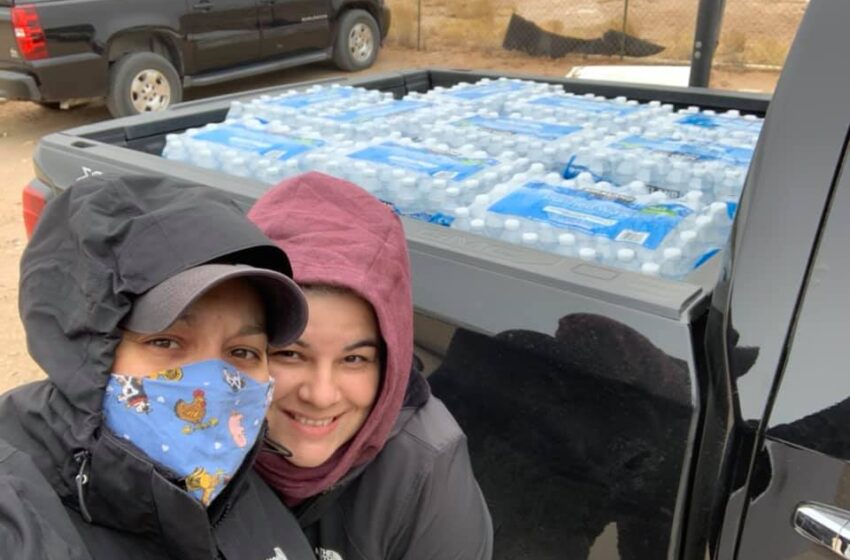 This has been an unprecedented year. We were hit with a global pandemic and life as we know it has been altered forever. While there have been many dark moments that have filled our news, we have also been witness to many selfless acts of kindness of everyday heroes. This is one of those stories.

As many of us were settling in to a quarantined Covid Christmas, our neighbors out in Desert Haven had their water turned off on Christmas Eve.

The unincorporated community, some 30 miles east of El Paso along US62/180, is caught between counties.  Although they reside in the 79938 zip code, they are not under the jurisdiction of El Paso County nor El Paso Water; their water company is privately owned and chartered in Hudspeth County.

Residents share that for months, officials with the water company had said there would be work performed on their system, but the date never was solidified and kept being pushed back.  All until Christmas Eve, when their taps ran dry.

Neighbors started to contact each other to get answers and since it was Christmas, they would have to wait to speak to someone at their local water company. The next available working day, a group of residents made their way to privately owned Cerro Alto Water Systems where they say their concerns were dismissed, and they were allegedly turned away without even an apology.

It was then that they realized they would have to save themselves.

Fire Chief Dwayne McCullough of Desert Haven Fire Rescue, was able to help them in the first few days by letting them fill up water jugs from the station water tank, but of course that is risky since they need that water in case of a fire.

County Commissioner- Elect, Johny Sheets, who resides in the area, immediately began to reach out to Judge Neely to see if El Paso Water could help with resources.

So on day six with 200 families affected in the area, and with no one doing anything about it, people came together to rescue their community.

Ronnie Ordóñez, an educator and administrator in El Paso, posted on social media about starting a Water Drive. Friends from all over social media began to donate and volunteered to help deliver water. Local residents, like Cindy and Rufus Graham, reached out to local organizations to see who could help.

Just a few hours later, their water drive took off.

As we spoke on the phone Tuesday night, I asked if there was concern about how much help they could really do with limited water supplies (which they are buying with their own money and donations that come in) to which Ronnie replied, “I don’t know how we will do but we will keep working to make sure we get everyone the help they need.”

I personally shared the story on my social media where it caught the attention of water organizer, Tiffani Bell, Co-founder of the Detroit Water Project, who immediately reposted the story and reached out to send water.

In a year when washing your hands is now life and death, a last line of defense against Covid-19, I was heartbroken, frustrated, and angry that members of our community  were being ignored and left to fend for themselves during a global pandemic DURING the holiday season.

I went to bed with a heavy heart, but hopeful, that our collective voices would reach the ears that needed to hear the call.

And just like in a holiday movie, as if God heard their prayers (and I believe He did) Wednesday morning I woke to the news that they had received PALLETS of water from the community.

So, on a chilly Wednesday morning – the next to last day of the year – the small army of water warriors were making rounds delivering water to the 200 families in need.

If you’re wondering about elected officials and their assistance, I thought the same thing.

I used social media to ask Republican Congressman Will Hurd for a response, since this is happening in his district, and I did not hear back from him.

Later, I also reached out (via social media) to Republican Congressman-Elect, Tony Gonzalez, and he immediately replied. He asked for a contact person and told me he wanted to do whatever he could to help. Ordóñez told me his office reached out first thing in the morning and he followed up personally with a call.

As we are about to enter a new legislative session and campaign season is over, I was pleasantly surprised that the new Congressman actually showed genuine interest in this portion of his district, that has largely gone ignored. Only time will tell what kind of a representative he will be, but I will give the new Congressman credit, he did keep his word to follow up and I appreciate him reaching out.

As for the water company, residents say they are still waiting to hear when it will be restored. In the meantime, they are taking care of each other as best they can.

The community of Desert Haven wanted to express how very thankful they are to Costco, El Pasoans Fighting Hunger Food Bank, El Paso Water and to every single person who donated, helped and/or shared their original story.

And I want to thank our neighbors, the people of Desert Haven, and ALL our everyday heroes / essential workers of El Paso, for having restored my faith in humanity, and being true examples of giving hearts and love of community.

As we prepare to begin a new year and this dark and heavy year draws to a close, I am reminded…”and now these three remain: faith, hope and love…”

we received word that residents finally had their water restored on New Year’s Day,  January 1st, 2021