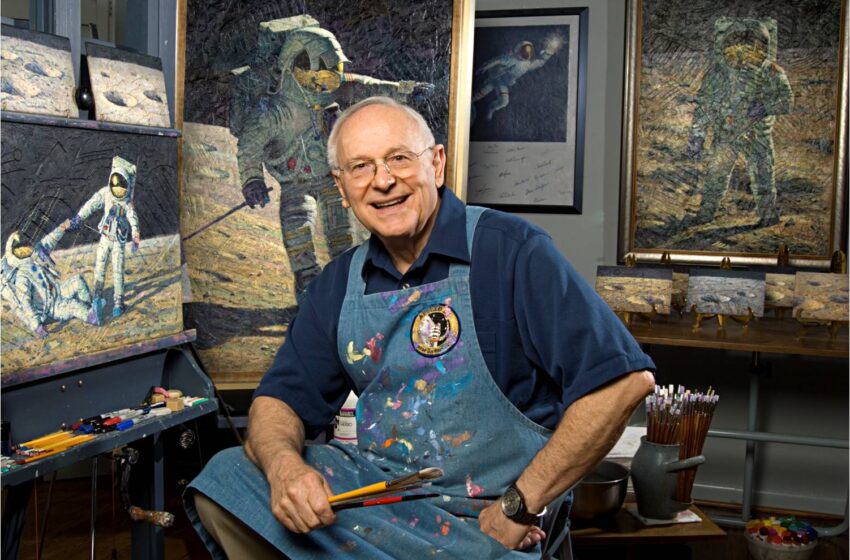 Astronaut Alan Bean, retired Navy Captain, hero of the space race and the fourth man to walk on the moon, passed away Saturday, May 26, at Houston Methodist Hospital following a sudden illness.

Of the twelve original moonwalkers, only four remain with Bean’s passing – Buzz Aldrin, Dave Scott, Charles Duke and Jack Schmitt. Bean was a retired Navy Captain, a spaceflight veteran of the Apollo and Skylab programs, and an accomplished artist.

He was inducted into the International Space Hall of Fame in 1983.

Bean was born in Wheeler, Texas, on March 15, 1932. He is survived by his wife Leslie, of forty years, his sister, and two children.

The staff and friends of the New Mexico Museum of Space History and International Space Hall of Fame send their deepest condolences to the family.

Museum Executive Director Chris Orwoll expressed his personal sympathies, “I had the incredible privilege of spending time with Captain Bean several years ago at his home and art studio. He was a kind, caring man and an amazingly talented artist. The world has lost one more hero.”

Shortly after liftoff, the Saturn V booster was struck by lightning twice which knocked out the spacecraft’s fuel cells. Ground control directed the crew to flip an obscure switch and Bean, who was renowned for his attention to detail, knew exactly where the switch was and his quick action brought the fuel cells back on line.

Five days later, Bean and Conrad, aboard the lunar module Intrepid, made a perfect landing in the Ocean of Storms on the lunar surface. The team explored the lunar surface, deployed several experiments, and installed the first nuclear power generator on the moon. In addition, they returned home on November 24 with a cargo of 76 pounds of lunar samples.

Captain Bean’s next space mission was as commander of Skylab Mission II (SL-3), the second crew of America’s first space station from July 29 to September 25, 1973. With him on the record-breaking, 59-day, 24,400,000-mile flight were Dr. Owen K. Garriott and Lieutenant Colonel Jack R. Lousma.

During the mission Bean tested a prototype of the Manned Maneuvering Unit and led three space walks. Mission II accomplished 150% of its forecast goals. On his next assignment, Captain Bean was backup Spacecraft Commander of the United States flight crew for the joint American-Russian Apollo-Soyuz Test Project.

During his two missions, Alan Bean logged 1,671 hours and 45 minutes in space. He retired from the Navy in October 1975 but continued as head of the Astronaut Candidate Operations and Training Group within the Astronaut Office in a civilian capacity.

He resigned from NASA in June 1981 to devote his full time to painting. He said his decision was based on the fact that, in his eighteen years as an astronaut, he was fortunate enough to visit worlds and see sights no artist’s eye has ever viewed firsthand.

Of his visit to the moon, he said, “It was hard to believe that everybody I had ever known or seen on TV, and the places they lived and played, were all on that little blue and white marble.”

Like all of the Apollo era astronauts, Bean trained rigorously for his missions. In fact, he and thirteen of his fellow astronauts spent time in New Mexico at Philmont Scout Ranch for geology training in 1964.

While there, the astronauts were presented treated to a special award night where they were each presented with red jackets emblazoned with the Philmont bull. Bean, and the majority of the other astronauts who trained at Philmont, was actually a former Boy Scout himself.

In a letter to Philmont staff, Bean said, “The scenery, personnel, and the feeling that one gets while at Philmont will never be forgotten by the fourteen of us.”