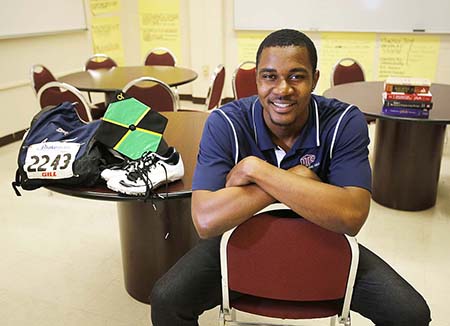 A Division I athletic scholarship was A-Shawni Mitchell’s ticket to a new life with endless possibilities, including graduating from UTEP this past May with a bachelor’s degree in mechanical engineering.

But his new life was almost over before it began.

It was during his senior year in high school in his home country of Jamaica when a quad injury threatened to take away his dreams of a Division I scholarship. Three universities that were interested in him stopped pursuing him. Then UTEP offered him a scholarship to run sprints for the Miners.

“It was very emotional because I felt like this was where my life ended – at high school,” Mitchell, 24, said. “Being able to get the scholarship inspired me even more to see this all the way through. I didn’t want it to be a wasted opportunity.”

He made the most of his opportunity, even though some people back home told him that working toward a mechanical engineering degree while running on the track team would be too hard.

“My mindset was that I was very determined to make it happen,” Mitchell said. “In the back of my mind, I’m waking up on a mission just to get through the studying and going to meets. In the back of my mind I need to get this done because I could help my mom, my family and even my community.”

Mitchell lived with different family members in high school because his mother worked as a live-in domestic helper for a family in the United States and his father sold goods on the street.

“I’m not going to say my life growing up was the hardest, but it was definitely poverty-ridden,” Mitchell said. “There was nobody that was wealthy, that had that image that could show you, ‘This is what you can achieve.’ Growing up I saw what my mother did and what my father did and I decided I needed something better for myself.”

His high school track career started by accident – and without proper running shoes – at Wolmer’s Trust High School for Boys.

“In my first year of track I didn’t have running shoes,” Mitchell said. “I bought basketball shoes because basketball was my first sport. Then I ran and beat all the guys that transferred into the high school. And a former UTEP athlete, Bert Cameron, he took me under his wing. He said, ‘You don’t have much, but you could get a scholarship to pursue your dreams.’”

Mitchell took third place at the 2009 IAAF World Youth Championships, posting a time of 49.47 seconds in the men’s 400-meter dash. He also recorded a personal best in the 400-meter with a time of 48.25. As a member of the Jamaican world junior team, he was able to travel to Italy and Spain to compete.

Mitchell began his education and running career at UTEP in 2012, allowing him to get his degree, run for a conference championship team and learn about other cultures.

Among his athletics accomplishments, Mitchell registered 10 top-10 finishes in 2015 in the 200-meter and 400-meter events. Mitchell also qualified in the 400-meter at the NCAA West Preliminaries. He was part of the men’s team that took first place overall at the Conference USA indoor championships.

As a freshman in 2012, Mitchell was a member of the 4×400 meter relay team that broke the C-USA indoor championship record as they crossed the finish line with a time of 3:11.64.

Mitchell chose mechanical engineering because he’d always been interested in how things worked, whether it was a PlayStation video game or repairing cell phones for customers in Jamaica.

He is now pursuing a master’s degree in software engineering with an eye toward creating mobile apps and being involved in cyber security. He has an internship offer from Exxon Mobil and is being interviewed by Google, YouTube, and Intel for possible internships. He is expected to graduate with his master’s degree in 2018.

“If I’d stayed in Jamaica, I don’t think I would have been thinking of this type of career,” he said. “Starting with the scholarship, getting the books, and getting the classes paid for – in my head, it is a real blessing. A lot of people don’t have the means to get the education, but their talent propelled them to make their lives better. The scholarship has opened multiple windows, and I couldn’t be more happy and satisfied with the position I’m in right now.”