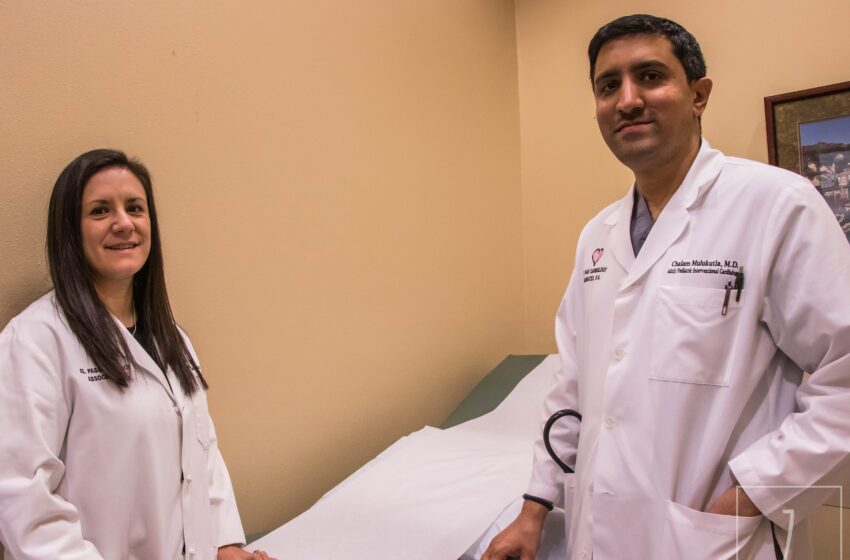 Very late last year I had a “minor” (is there such a thing) cardiac event. I ended up in the emergency room, worried that it was going to be the last moments of my life.

Laying there, listening to the beeps my heart was causing the monitor to make caused me to think of everyone else in my family who have died of heart attacks or had major issues with their heart.

I also remember a time in El Paso when you were needing cardiac care you literally had to leave town in order to get quality care. Thankfully, those times are changing.  And now, El Paso is also innovating – like the Watchman device.

What is the Watchman device? For those answers, I had a conversation with Dr. Chalam Mulukutla, a pediatric and adult interventional cardiologist.

According to Dr. Mulukutla, the Watchman device closes off an area of the heart that contributes to most strokes. It also allows the recipient to end their dependence on blood thinners.

Off to one side of the heart, as you can see in this video from Boston Scientific there is a small pocket. When the beating of the heart is
off, then blood begins to pool in that area. As it congeals, a clot forms and that’s where the lifetime of blood thinners and the risk of stroke, or death, comes into play.

“The Watchman device is actually a device which you actually put in that small area, which quivers in the left Atrium, in there’s like a little wind sock,” says Dr. Mulukutla.

“And in that windsock, what you do is you put a device that closes that area that that creates the clot. It’s amazing because the way God had created it, that area here is where all the clots form. And if you close that area, there aren’t any more clots to cause stroke. So in the studies, they compared to Coumadin, which is our medicine for blood thinning over the last 40 to 50 years, and compare it to the Watchman device. And they were equal. And in some ways, the watchman device may have been better, but it was a non-inferiority study, which is a fancy way of saying they both were equal. So, you could be on the blood thinner, or you could have this device and be protected equally.”

As I listened to Dr. Mulukutla explain the benefits of the Watchman Device and the fact it will help take a person off daily blood thinners, I began to wonder about the cost. I spoke to Enrique Mendoza, who is 82 years old and has been on blood thinners for the last seven years.

Enrique, or Kiki as his friends call him, says the medication is not covered by his insurance and is appealing that decision. For him, those seven years of medication have cost him around $44,100. That’s a lot of money for someone living off a basic retirement check. (Author’s note: I am only using what Kiki pays as a comparison for cost. He may not be a candidate for the Watchman Device, nor may the Watchman Device be indicated for him)

Still, there are other reasons for having the Watchman Device implanted.

“So normally these patients in the past would have several different options for them. One of them, most importantly, was blood thinners to be able to thin the blood where the top part was developing those clots. And if they thin the blood, then they wouldn’t develop clots. But there’s a lot of our patients, unfortunately that can’t be on blood thinners for a variety of reasons,” says Dr. Mulukutla.

During my conversation with the Doctor, I mentioned that I had come across a few doctors and web pages that said one should not have the Watchman Device at all, stating that it doesn’t prevent strokes. While I’ve learned that there are other causes for strokes, this does remove the most common cause for A-fib stokes.

Still, other doctors feel that it was not properly tested.

“I think this device is a very good device. It’s tested in randomized controlled trials comparing coumadin to the Watchman device , and they had many patients in that trial. In that trial, what they found was patients that were on that had the device implanted or stayed on coumadin had equal outcomes. I am not saying that every patient should have this device. That is absolutely not true, but those patients that cannot be on blood thinners for a variety of reasons are unprotected. And in the past, what we often told them was, you know, we’re stuck between a rock and a hard place,” said Dr. Mulukutla.

“Unfortunately, you can’t have anything, but by the way, you still have a risk of stroke. But I really can’t help you because if I do treat you, you bleed, and bleeding is pretty bad and we might hurt you. So, we’re just gonna have to hope that you don’t have a stroke. Rather than that, now we have an option.”

So, the device is tested, and approved by the FDA. Now, let’s say you do have A-fib and your doctor says he wants to implant this device. How is that done? If you’ve ever had a heart cath through the leg, then you kind of have an idea of what is done in order to implant the device. The main differences are that you’re unconscious during the procedure and the doctors go through a vein rather than the artery.

But it’s a bit more complicated than that.

So, the way we put the device in someone is we make a little poke mark in their groin, and we use a tube, and the tube then is navigated into the heart. We cross from the right side of the heart to the left side of the heart. And once we get on the left side of the heart, what we do is we navigate, it’s called a pigtail, but it’s basically a catheter that is navigated into this little windsock in the left Atrium, and we take pictures to see how it looks, and then we corroborate it on an Trans Esophageal Echocardiogram, which is an ultrasound machine that is put in someone’s throat and tells us exactly how the appendage looks.

Then we pick, based on that, the size that we think would be good for the patient to have. On the back table, we prepare that device, and it goes inside this little tube. It’s sort of smashed in there and elongated, and afterwards, when it comes out to the other side, it opens up like a flower.

So you sort of run it through the tube and then when you get to where you need to, it opens on the other side. Then you make sure it’s in the right place. And it’s closing the entire area and not having any leaks. Then you release the device, and then that is the end of the procedure.

The device itself is flexible. It is sized in a way that it will take hold of the heart and not come out. Once implanted, it will prevent clots forming or dislodging, causing a stroke, or death.

Then there is the time factor. The whole procedure takes about an hour. One hour of outpatient surgery and you will no longer be dependent on blood thinners for A-fib.

For me, this is an amazing breakthrough in technology. I can also think of all the lives that can and will be saved with this device. It’s really that cool.

For El Paso, this is an advancement in medical care. I have friends who have had to leave town for various treatments and procedures that are not offered here. Then, there are those who are just too sick to travel. I’ve always thought that in a city as large as El Paso, a city with its own medical school, that people should not have to leave for any sort of medical procedure. This is a step in that direction, and Dr.
Mulukutla expressed as much in his final thoughts.

“From our standpoint, El Paso is the 19th largest city in the country by population. And what we would like to do is improve our medical care in the cardiac space. That is what we are trying to do,” said Dr. Mulukutla.

“A lot of our patients have to leave the community for different procedures, a variety of things, whether they go to San Antonio, or to Dallas, or to Houston. Many of our patients, some of them that we treat, cannot leave; and others may not want to. We’d like to be able to offer cutting edge technology to be able to give standard of care from what’s being offered in other locations here in our community. And we think that a city this large should be able to provide those services. Not only will they provide services for the community, but for a lot of the outlying area in all of West Texas, southern New Mexico. Places that people, unfortunately, have even less care, depend on El Paso. We can be not only the leaders in medicine, but also take care of our community. So, our goals are to take care of our community and to help those that are in need.”

El Paso Cardiology Associates and Doctors Chalam Muulukutla, Moeen Abedin, Francisco Gonzales, Evan May and Daisy Nieto are the only doctors in this region that offer this procedure.

This advancement in medical care and treatment that is now available in El Paso, and I think that is something worth celebrating.

For more information, you can contact El Paso Cardiology Associates at 915-532-6767. Or, visit them online.