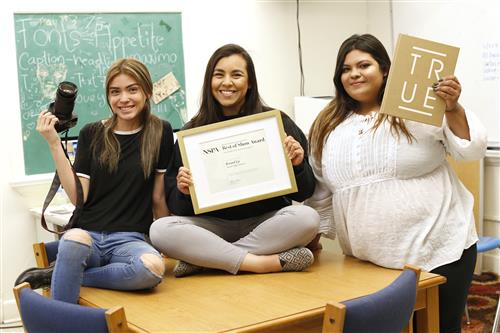 Student journalists at Austin High are looking to build on the long tradition of excellence in newspapers and yearbooks that have for decades brought state and national accolades to publications in the Sun City.

And so far, they’re succeeding.

Austin’s 2017 “Round Up” yearbook earned the staff a second-place spot in the National Scholastic Press Association’s Best in Show category — the highest rating achieved by any Texas school.

“This award is definitely a breakthrough for us … the publication and the staff have come a long way,” said Jessi Almanzar, Austin’s journalism teacher and advisor “Now, we know where we are, and it inspires us to work even harder to go even further.”

Burges High School’s “Hoofbeats” yearbook took 10th place in the national competition. EPISD is the only district in the country to place two schools in the top 10 in this category.

“Our No. 1 priority is to create a book the school is proud,” she said. “You can open the book and capture the essence of the school year. We want the students to be able to re-live the school year through the photos and the stories.”

Almanzar has submitted the yearbook to the association for critique over the years. Only in the last three years has she entered it to compete against other yearbooks from around the country.

“Once I felt the book was ready for critique, we would submit the books,” she said. “We would get very valuable feedback to see what areas we needed to work on. We were consistently getting better ratings over the years.”

The Austin staff was overjoyed to be one of the Best of Show winners, along with Burges High School’s top-performing publication. “Hoofbeats” placed tenth in the category.

“The Burges High School yearbook has always been for us the best book in El Paso. They have won so many top national awards,” Almanzar said. “It’s a publication we have always respected and looked up to so to be on the same list as it is a big deal.”

The theme of the award-winning yearbook was “True,” encouraging students to live their most authentic selves.

“Knowing all that hard work paid off feels really good,” she said. “We definitely want to go for first place and make it an even better book this year.”

Her favorite story focused on student athlete Pedro Osoria, who uses a blue marker to write the name of his late cousin Alex on his wrist before the start of every baseball game.

“It was a powerful story because they were best friends. They played little league together, so when he died (in a car crash) it was really difficult for Pedro to play baseball because it reminded him of Alex,” Contreras said. “Writing his name is a way to honor his cousin’s memory and bring him good luck.”

Besides the writing, the yearbook has received praise for its strong photography – something that makes head photographer Priscilla Gomez grin from ear to ear.

“It feels great because we put in a lot of time, work and dedication into the yearbook,” she said. “I am very competitive so it feels awesome to beat other schools.”

The senior, who has been in yearbook the last three years, loves capturing Austin student life.

“A lot of people just see it as a photo, but only other photographers know how much work goes into a photograph,” Gomez said. “You have to get the right angle and lighting.”

She hopes other students see how far the yearbook has come and feel encouraged to join and continue building on their success.

“I want them to not feel timid to join because you never know what talents you have to share,” she said. “It feels great to represent Austin. This school has a lot of school spirit. At first I wasn’t sure of coming here, but now I would defend this school a capa y espada (to the death).”

Almanzar is proud her staff, especially since Austin has such a diverse population, from generations of central El Pasoans to students from Juarez and the military.

“I think it shows in the book the love this campus generates,” she said. “Those three demographics become family and work as one. It’s a special place. I went to Silva, but I’m a Panther now.”