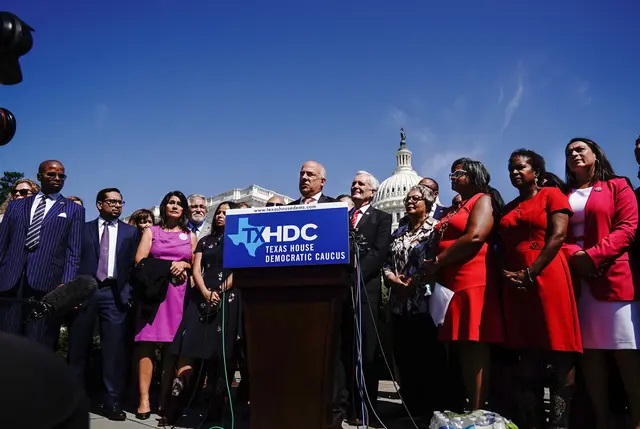 At least 50 House Democrats that Texas left the state held a press conference in Washington D.C. The democrats broke quorum and stopped Republicans from taking up GOP priority bills on July 13, 2021. Credit: Shuran Huang for The Texas Tribune

A state district judge in Travis County issued an order blocking the arrest of House Democrats who have broken quorum by leaving the state, paving the way for those who remain outside of Texas to return home without threat of apprehension.

In July, more than 50 House Democrats decamped to Washington, D.C., during a 30-day specially called legislative session to block the passage of an elections bill they said would restrict voting access. The remaining members in the chamber, mostly Republicans, voted to authorize a “call of the House” under which all entrances into the chamber can be locked and lawmakers are not permitted to leave without permission from the speaker. They also asked the chamber’s sergeant-at-arms and other law enforcement officers to bring the missing lawmakers back “under warrant of arrest if necessary.”

Abbott had called for the arrest of the Democratic lawmakers as soon as they returned to the state and Phelan signed a civil warrant for Rep. Philip Cortez after he returned to Austin from Washington, D.C. in July only to leave the state capitol again a few days later.

The petition for the restraining order appears to be preemptive in nature, as the House has not yet voted to renew a call of the House in the second special session which began Saturday.

“[T]he Speaker thinks he can wave his hand and have his political opponents rounded up and arrested. We’re watching a major political party backslide in real time from fair representation, the rule of law, and democracy itself,” said Dallas State Rep. Jasmine Crockett, one of the plaintiffs in the case.

Enrique Marquez, a Phelan spokesman, said Monday morning the speaker’s office had not yet been notified of the suit or restraining order. Abbott’s office did not immediately respond to a request for comment.

The lawsuit was filed on behalf of 19 House Democrats by attorneys Samuel E. Bassett, Jeremy Monthy and Megan Rue.

“No matter what the Governor or Speaker have said, it is a fundamental principle in this country that no one has the power to arrest their political opponents. That is why this action had to be filed,” Bassett said in a statement.

It is the second lawsuit filed by House Democrats in an attempt to avoid arrest if they returned to Texas. The other was filed Friday by attorney Craig Washington in federal court in Austin on behalf of 22 House Democrats. It was riddled with problems, including subsequent statements by at least four of the plaintiffs that they had not authorized the suit on their behalf.

The lawsuit in federal court also named State Rep. James White, R-Hilister, as a defendant. White is not named as a defendant in the case in state court.

Reference Read the Democrats petition for a judge to block their arrests. (1.7 MB)

In his order, Urrutia said Abbott and Phelan erroneously interpreted Texas law and legislative rules to allow the apprehension of members of the House in response to a call for quorum. He barred the defendants from detaining or restraining the Democrats’ movement in any way and from issuing warrants or other documents ordering their apprehension. Urrutia also barred the defendants from ordering law enforcement to arrest the lawmakers.

The Democrats successfully held off passage of the controversial elections bill during the first specially called legislative session, which ended on Friday, but Abbott called for a second 30-day session that started on Saturday to push the bill, and other pieces of legislation, through. A few House Democrats signaled they’d return to the state but at least 26 holdouts said they would stay in Washington. All of the plaintiffs in the case in state court indicated they would stay in the nation’s capital.

The House did not reach a quorum on Saturday and will gavel in for session Monday at 4 p.m.