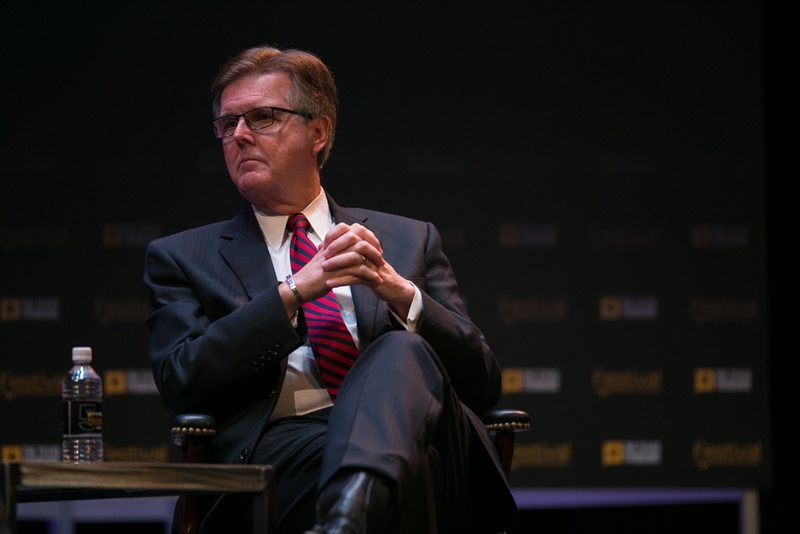 The battle over who exactly can use which bathroom may be coming to Texas.

Activists, lawmakers and state leaders are eyeing Texas as the next front in what has become an explosive national debate: the right of transgender people — those who identify with a gender that doesn’t correspond with their sex at birth — to decide which bathroom they use. Undeterred by the ongoing fallout from a controversial law in North Carolina, Texas Republicans are putting a new emphasis on the issue with nine months until the next legislative session.

“Texas will be the next battleground,” said Jared Woodfill, a conservative activist who is pushing for the Legislature — and the state GOP — to make clear its opposition to letting men in women’s bathrooms. “In Texas, we need to draw a line in the sand. We need to stand with North Carolina.”

Activists like Woodfill have found an increasingly helpful ally in Lt. Gov. Dan Patrick, who is calling the issue a priority for the next

legislative session. In an interview Wednesday, Patrick said it remains to be seen what kind of legislation the issue would require but it is “very possible” a statewide bathroom bill could be necessary.

Others are taking cues from the defeat last year of the Houston Equal Rights Ordinance, which critics successfully claimed would have let men use women’s bathrooms. State Rep.Matt Shaheen, R-Plano, said his initial preference is legislation that prevents “cities from passing ordinances that mandate businesses to allow men to go into women’s bathrooms.”

Looming over the discussion is North Carolina’s House Bill 2, which has become a lightning rod for its provision prohibiting transgender people from using bathrooms that do not match the gender on their birth certificate. The law, which was signed last month by Gov. Pat McRory, has caused a fierce backlash, particularly among businesses now reconsidering their investments in the Tar Heel State.

It is unclear whether other Texas officials are as committed to the issue as Patrick is. Gov.Greg Abbott signaled solidarity last year when he joined Patrick in urging Houstonians to reject the nondiscrimination ordinance. “No men in women’s bathrooms,” Abbott tweeted at the time.

“Governor Abbott has always sought to protect family values in Texas, and he looks forward to continuing that work in the 85th legislative session,” Abbott spokesman John Wittman said in a statement Wednesday.

Perhaps no Texas Republican has been more outspoken on the issue than presidential hopeful U.S. Sen. Ted Cruz, who has been attacking frontrunner Donald Trump on a daily basis for his comment last week that transgender people should use whichever bathroom they prefer. While Trump later somewhat walked back the statement, Cruz has been eviscerating the billionaire for falling prey to the same political correctness embodied by Democrats and their likely presidential nominee, Hillary Clinton.

“I think the handwriting is on the bathroom wall: Men need to stay out of the ladies’ room,” Patrick said. “This isn’t about equal rights. This isn’t about being against anyone or anti-any person. This is about common sense, common decency and allowing women to have comfort when they’re in the bathroom.

“Such arguments draw deep skepticism from LGBT advocates, who say there is virtually no evidence to suggest that Texas — or any other state —has seen transgender people attacking others in bathrooms. Instead, the advocates say, efforts like those ramping up in Texas serve to further stigmatize transgender people and perpetuate violence against them.
Activists and lawmakers are still figuring out how to tackle the issue in 2017, but some point to House 1748, an ill-fated bill from the last session that would have created a criminal penalty for anyone who enters the bathroom designated for the gender with which they were not born.

In Texas, the prospect of a battle similar to the one unfolding in North Carolina is alarming a business community already weary of the perception the Lone Star State is less than inclusive. Among those sensing the anxiety from businesses is Texas Competes, a coalition of more than 850 companies that aims to ensure an LGBT-friendly climate in the state.

“I hear it every day, concerns and questions: ‘Is it really going to happen here?'” said Jessica Shortall, managing director of Texas Competes. Texas, she added, “will suffer an enormous price if the state projects hostility toward LGBT people.”

Those on the other side of the issue argue businesses are succumbing to political correctness, making threats they often do not follow through on once the dust settles. Patrick called such concerns from the business community “nothing but bluster and bluff.”

“They said all those things in Houston and we still had the Final Four,” the lieutenant governor said, referring to the college basketball tournament that was held last month in the city. “The Super Bowl’s coming in January, and businesses continue to move to Houston.”

Patrick announced earlier this week he is boycotting any business that “allows men to use women’s bathrooms.” He and other Texas Republicans have zeroed in on Target, which became the first national retailer to wade into the issue when it announced last week it will allow transgender customers to “use the restroom or fitting room facility that corresponds with their gender identity.”

Shaheen said he is not worried about upsetting companies like Target, which in 2015 counted Texas among its three largest states by total sales.

“If Target wants to close all their stores in the state of Texas, I will go over and help them pack and help them leave,” Shaheen said. “I will die on this issue politically. I am going to bat for my wife and my daughters.”

Vehemence like Sheehan’s underscores the contrived nature of the debate, according to LGBT advocates.

“These proposed gender-police laws are a solution in search of a problem, and actually it’s pandering and it’s dangerous,” said Chuck Smith, executive director of Equality Texas. “Texans know which restroom to use, and they don’t need any help from the Legislature.”