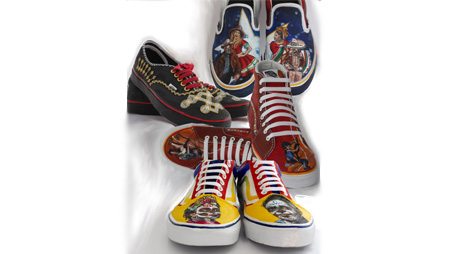 The Bel Air High School art program is asking for the public to vote online to help them win a $50,000 grand prize for their school’s art program in the Vans Custom Culture art competition, which challenged students to customize four pairs of Vans shoes.

For the Vans competition, Bel Air HS students created designs with the following themes: Art, Music, Extreme Sports, and Local Flavor. The designs were inspired by the bicultural atmosphere of Texas and Mexico, mariachis, Dia de Los Muertos (Day of the Dead), and Hueco Tanks mountain-climbing.

After an initial round of judging, designs submitted by Bel Air HS were identified among the top 50 entries in the nation. The top 50 designs are on display online, by region, and the public is being asked to vote every day for their favorite design through 5 p.m. PST on May 11.

Bel Air’s designs can be found in the Southwest region.

Once the online votes are compiled, the top five finalists will be flown to Los Angeles in mid-June to showcase their designs to a panel of noted judges as they compete for the $50,000 grand prize, according to the contest rules.

This is the seventh year of the Vans Custom Culture art competition, which aims to inspire high school students across the United States to embrace their creativity and draw attention to the importance of arts as an integral part of our schools’ focus in the face of shrinking budgets.

The grand-prize winner will receive a $50,000 donation to their school’s art program, and Vans may develop a limited-edition sneaker based on the winning design.

Four runners-up will each receive $4,000 donations to their programs as well. Additional prize money will also be given to the school with the best Local Flavor design.