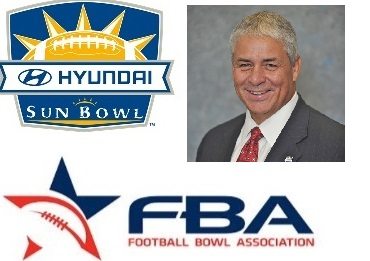 Bernie Olivas, who has overseen the unprecedented growth and development of the Hyundai Sun Bowl since 2001, will take over as Football Bowl Association chairman this coming July 1. The announcement was made by FBA Executive Director Wright Waters.

“Bernie has been an integral member of the FBA’s executive committee,” Waters said. “That role has prepared him well in terms of this appointment, and I greatly anticipate working with Bernie and the committee to further the FBA’s work on behalf of the bowls and the student-athletes who play in them.”

A native El Pasoan, Olivas oversees 20 different special events in and around the Hyundai Sun Bowl, which matches teams from the Pac-12 and Atlantic Coast Conferences. Those include the WestStar Bank Don Haskins Sun Bowl Invitational college basketball tournament and the Sun Bowl Fan Fiesta.

“I am extremely humbled to be the chairman for the Football Bowl Association and I hope to continue the work that the previous chairmen have begun,” Olivas said. “I look forward to working with FBA Executive Director Wright Waters and all the member of the FBA. I’ve seen this association grow immensely over the years and it is great to bea part of an organization that is working hard to make the bowl experience better for everyone involved, especially for the student-athletes.”

The annual Hyundai Sun Bowl produces the largest economic impact in El Paso for a single event in the city. The Sun Bowl has also been aligned with CBS Sports since 1968, the longest running association between a bowl game and network in history.

Olivas was a Sun Bowl volunteer for more than 20 years. His involvement began when he joined one of the team host committees; he was named to the game’s board of directors in 1992 and continues to serve on the team selection committee.

Prior to joining the Sun Bowl Association fulltime, Olivas had a 13-year career with Merck Pharmaceutical Company.

As an at-large member, Olivas has added Pete Derzis [ESPN].

Olivas takes the reins from 2015-16 chairman Bruce Binkowski, recently-retired from service with the Holiday and Poinsettia Bowls. “I am extremely grateful for all the hard work Bruce put in on behalf of the FBA,” Waters said. “We will continue to call upon his expertise in the future.”