Now that we’ve all rehydrated cooled off from the weekend heat advisory , it’s time we stop and send our gratitude to the overall team that brings us this downtown gift every year.

All together now: THANK YOU, DOWNTOWN STREET FEST TROOPERS AND NINJAS FOR LOVING EL PASO THE WAY YOU DO.

I’ve frequented a few Downtown Street Fests in my time, one of the most memorable being the night I dried out my tear ducts on heavy-gasp-repeat to “Machinehead” with Gavin Rossdale back in ’12. Street Fest, like most festivals, dangles the music carrot in my face (rock & roll in this case) and it’s typically always been a music attraction for me. And the turkey legs.

I was delighted to find, in my desperate search to cure swamp ass, an air conditioned barrio bling heaven adorned with endless rows of polished chrome and paint job perfection accessorizing the The biggest car show in El Paso. How did I miss this in years past?!

The 2016 Custom Car Show, curated by Benny Ramos of Imperials Car Club did an incredible job of showcasing the beauty and aesthetics of Lowrider art. So much that I even questioned customizing my own for my future retirement because I seriously envisioned myself cruising one on Sundays with the oldies blaring.

The cars come in from all corners of the Southwest, Central Texas and East Los Angeles and my stroll down chola brick road took me back to my early teenage identity crisis when I lived by the vanilla Bonnie Bell lip gloss and Soft Brown Cover Girl liner.

But on the topic of cash, the car show awards about $10,000 in cash and prizes, hence the caliber of car show Imperials is able to line up. The pride swells for Ramos when he literally sees the stereotype of “ghetto” low riders broken down with the reactions of bewilderment from unsuspecting visitors like myself.

“We bring champions, the high quality custom cars from out of town that they’ve never seen before,” he said. “It really surprises them and those are my favorite moments of the show.”

2. The HeART of the Art Park

Maybe it was Gavin’s tight pants in 2012, or Weezer’s 90’s hypnosis in 2015 that kept me from truly exploring my hometown festival (shame on me) but this year, I covered every inch of the footprint with sober…and sweaty.. perspectives. It was fantastic to shift from the rock and rollers’ vibes to a somewhat hidden but booming heartbeat in the Plaza courtyard.

Going on its third year, the Street Fest Art Park is nestled between the El Paso Museum of Art and the Plaza Theater in front of the historic

Camino Real hotel. The space was transformed with an army of spray-painting-brush-stroking-stencil-pasting artists vying for the title of

“It was cool to be lost in my painting and look up and see time had passed by the progression of other people’s art pieces. We were all doing our own little snow angel,” said Art Park participant Joseph Peterson. “It’s almost like magic in a sense.”

This “magical” outdoor street museum instilled a living, breathing passion into the area as artists combined their creative energies and committed their visions to blank canvas panels for the two-day event. The atmosphere they created was peaceful, despite the raging rappers scheduled as I strolled through.

It was a festival in itself with the combination of elements including a small music performers’ area, muralists, hula hoopers, mini-art gallery displays, body painters, and most of all, colorful, diverse, and appreciative audience.

Last year’s Live Art Contest Winner and Visionary Victor “Versus” Soto worked alongside Diego “Robot” Martinez, Joey “Delgato” Delgado and Ricardo “Enks” Uribe (a contestant featured on GSN Network Skin Wars) to devise the massive mural. The result.. well, see for yourself. The “El Paso and Street Fest” theme took a life of its own through the eyes, ears and hands of the trio, creating the suitably titled “Los Visionarios son La Verdad,” incorporating the borderland culture into their artistry.

“The general background talks to us about a space on the grid united by mountains all across the 24 feet we had to work with,” Soto

explained to me. “Mountains are one thing that both cities share and have in common. In a sense, we wanted to render our location in the world replacing the border fence with a Toltec style pyramid, which symbolizes us [the people] in between the two sister cities.”

“We got such positive feedback on this piece,” he said. “Everyone looked amazed when passing by, I was even amazed with the finished product because I think Los Visionaries found a formula that works well where we can all collaborate on one piece and still make it look uniform. We got new fans and followers, and even made some connections for future projects.”

Through my music detour, I discovered new artists, and my love for the ones I’ve followed throughout the years was only reinforced by their evolving talent. For me, the biggest reward was seeing the pleasure in patrons faces as they embarked through the Art Park.

“The people that did have a chance to see the art were very involved, asking the artists questions, taking pictures and actually standing around for a while to watch the progress,” said live artist Alex Arriaga. “I came across quite a few people who kept coming back not only for the live art but to purchase from vendors and ask more questions about personal work they would like done.”

El Paso gets an “A” in art appreciation at Street Fest.

The winner for this year’s Live Art Contest was Stephen Espinoza. He took home a well-deserved $200 in prize money.

“I’ve live painted at StreetFest for the past three years,” Espinoza said. “I was one of the first artists to do it, and I’ve been asked back ever since. It’s been an incredible opportunity for growth and promoting myself.”

It was most definitely worth the brief detour from the main stage. Not to say the music stages didn’t sway me and leave my with the usual morning-after soreness from the head banging and toe twinkling. This time around however, the newly discovered festival ingredients only enhanced my appetite for the Downtown Street Fest and pride for the evolution in El Paso entertainment and talent.

But no pride for the triple digits. None. At. All.|

Note: To view Andres Acosta’s view of the Downtown StreetFest click DAY ONE or DAY TWO 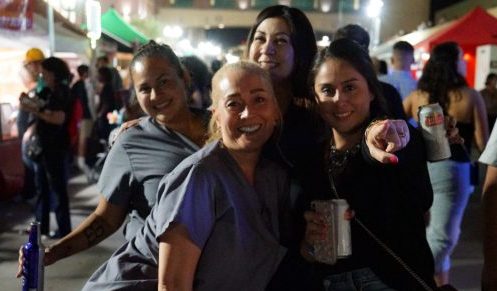 Story in Many Pics: StreetFest Takes Over...