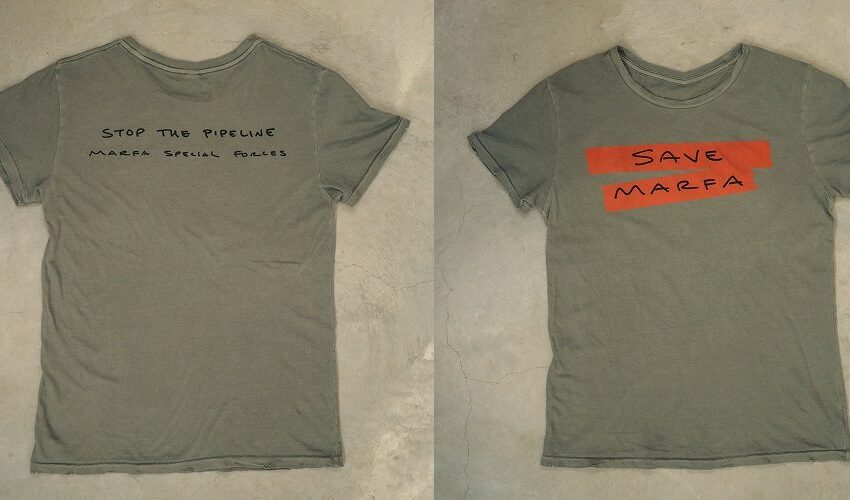 The Big Bend Conservation Alliance (BBCA) announced Tuesday a partnership with director Sofia Coppola to release a limited edition t-shirt in support of BBCA’s fight against the Trans-Pecos Pipeline and its mission to preserve and celebrate iconic West Texas.

The Save Marfa t-shirt, designed by Coppola, intends to bring awareness to the environmental challenges facing Marfa and the Big Bend region including the Trans-Pecos Pipeline, light pollution, and increased fracking.

Through conversations with Rainer Judd, daughter of artist Donald Judd, Coppola designed the Save Marfa t-shirt with handwritten text that reads “Marfa Special Forces,” invoking a task force of the popular travel destination.

“I’ve known Rainer since we met as teenagers and we have been friends over the years,” said Coppola. “We share a love of art and revolutionary spirit. I remember visiting her childhood home in Marfa with her years ago and when she told me about the pipeline there, I helped her make this t-shirt to bring whatever attention it can to keeping Marfa’s land and sky protected.”

All proceeds will benefit the BBCA in support of their fight against the Trans-Pecos Pipeline and other threats facing the Big Bend region. The t-shirt can be purchased for $40 online and locally in Marfa at The Capri.

Big Bend Conservation Alliance (BBCA) is a volunteer-driven organization that seeks to celebrate and preserve the natural, cultural, and economic resources of the Big Bend region of Texas.

BBCA was started in response to the Trans-Pecos Pipeline in order to provide a reputable source of accurate, important information about the project, its progress, and its effects to the area’s environment and residents. As BBCA’s work has developed, the organization’s focus has broadened to address four topics that represent the core challenges to the region’s integrity: landowner rights, eminent domain abuse, clean water, and dark skies.

Further, BBCA seeks to protect the fundamentally American right to life, liberty, and the pursuit of happiness, as well as due process when one of those rights is threatened.

The Trans-Pecos Pipeline (TPP) is a 42-inch natural gas transmission line designed to send and receive up to 1.35 billion cubic feet of United States fracked gas to Mexico for further shipment overseas. The pipeline crosses through Big Bend, running east of the Davis Mountains, through the famed Marfa Lights area, and alongside the Chinati Mountains before tunneling beneath the Rio Grande into Mexico.

Although the United States is covered with oil and gas transmission pipelines, these existing pipelines until now have ended in the Permian Basin, far north of Marfa and the Big Bend Region.

The pipeline opens the door to additional industrial infrastructure in the Big Bend region, destroying the area’s pristine nature. The Big Bend is an unparalleled geological and ecological showcase, famous for its brilliant night skies and panoramic vistas. There is no precedent in this region for the scale of ground disturbance required during construction: a 125-foot wide bladed corridor along the entire 148-mile pipeline route.

Along the way it cuts through intact native grasslands, desert scrublands, and across intermittent and ephemeral desert streams that harbor rare species with limited distributions.

With the construction of the pipeline, a network of new roads and associated pipeline infrastructure such as block valves, meters, and blowdown stations are being built. In the process the pipeline and its infrastructure fragment one of the largest intact bioregions in the country uniquely sensitive to human disturbance. It is a fragile bioregion that can take generations to recover.

For more information on the impact of the pipeline, click HERE.