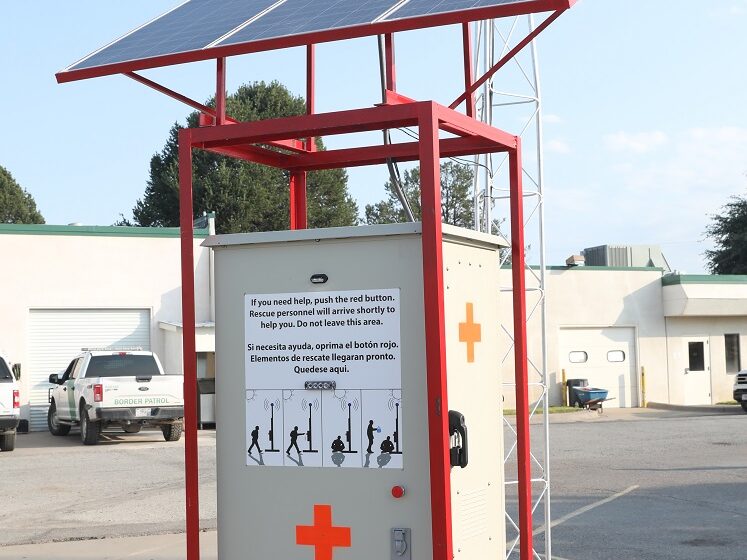 Close-up of the front and side panel showing markings and the red activiation button on rescue beacon units displayed by Border Patrol’s Big Bend Sector in Marfa, Texas, July 23, 2021. Chief Patrol Agent Sean L. McGoffin was joined by regional and state law-enforcement officials in a news conference to provide life-saving information and warn of the dangers of crossing the border. (U.S. Customs and Border Protection photo by Greg L. Davis)

MARFA, Texas – The Chief Patrol Agent for Big Bend Sector held a news conference Friday to discuss the deployment and effectiveness of rescue beacons across the sector.

“Rescue beacons being deployed by U.S. Border Patrol through partnerships with land-owners are saving lives,” officials shared. “They are proving to be an important tool for undocumented migrants to find them, day-or-night, and call for assistance in the unforgiving terrain of West Texas.”

The rescue beacons are activated with the simple push of a button to notify Border Patrol of people in distress.

Border Patrol Sector Chief Sean L. McGoffin was joined by representatives from local governments as well as law-enforcement partners at the local and state level. Should undocumented migrants find themselves abandoned in the desert terrain, the harsh conditions mean activation of a rescue beacon may be their only chance of survival.

The initial deployment of a rescue beacon near Sierra Blanca has resulted in four separate activations, which represented ten persons. These are ten lives that have been potentially saved had they not been able to seek assistance in other ways.

“There’s been an exponential increase in traffic across some of the most difficult terrain in all of Texas,” Big Bend Sector Chief Patrol Agent Sean L. McGoffin stated. “Rescue beacons are saving lives by allowing us to rescue people abandoned in the desert.”

Rescue beacons are painted with high-visibility orange markings, have instructions in multiple languages and have an elevated blue flashing light which can be seen from great distances at night.

The entire unit is self-contained and powered by solar panels.

Big Bend Sector is working with land-owners and local governments to accelerate the deployment of additional units across the region. 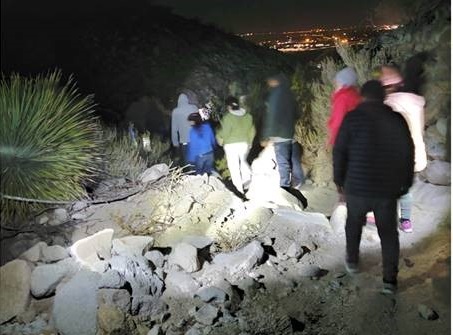