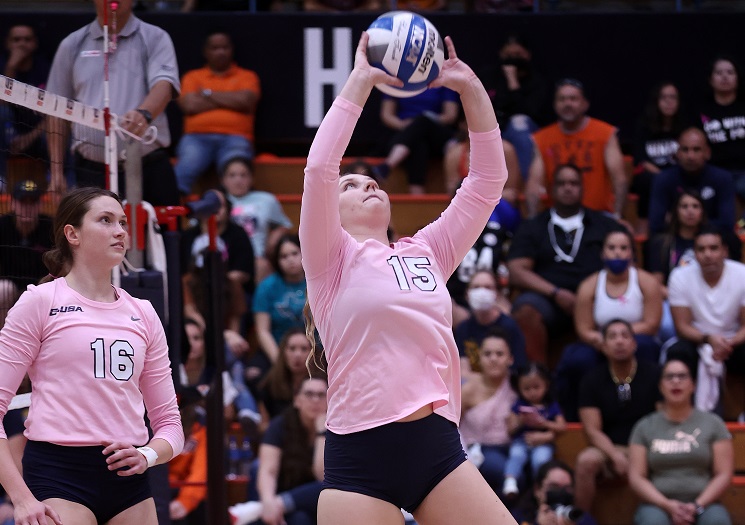 “It was a grinder match like I said from the beginning and we were able to grind out this win,” head Coach Ben Wallis said. “Serena (Patterson) was very good at keeping everyone locked in with Kristen (Fritsche). UTSA served it really tough for two to three sets. They tried really hard to get us out of sorts and they did that for a little while, but we stayed strong and stayed competitive.”

SET ONE: UTEP took the lead with three straight kills. UTSA attempted to rally only being able to tie up the scores four times. The Miners continued with multiple scoring runs, but the Roadrunners turned around with a 4-0 run to get just one point behind. Patterson led the unit to set point and then closed out the set, 25-23.

SET TWO: UTSA gained an early lead with UTEP trailing by three points. A kill by Howard tied up the score and three consecutive attack errors on the Roadrunners made way for the Miners to take the lead. As in the first set, Patterson moved the squad into set point and once again closed out the set, 25-18, taking a 2-0 advantage in the match.

SET THREE: A drastic change of pace occurred as UTSA gained the lead and didn’t give up an opportunity for UTEP to take a lead. As the Miners trailed by one point, the Roadrunners ran with a 7-0 scoring run. After six exchanged points, the Roadrunners avoided a sweep and won the set, 25-17, landing them on the board, 2-1.

SET FOUR: As the Miners looked to stop their opponent, both teams recorded multiple scoring runs to start the fourth set. This back-and-forth set consisted of six tied scores and no lead change. UTSA reached set point with UTEP trailing by four and went on to win, 25-21, forcing the Miners into a fifth set.

SET FIVE: The Miners laced up their shoes and ran with an 8-1 scoring run that consisted of three service aces by Ava Palm to take a giant lead in the set. The Roadrunners gained some momentum, but were no match for the Miners’ offense. UTEP scored its final point, won the set, and snatched the match, 15-9.

“I’m really proud of my team being able to come out here in a pretty hostile environment,” Wallis said. “Their crowd was great. Their crowd was loud. Hopefully we can lick our wounds, rest our bodies and get back here tomorrow with a healthier team to play a little bit better.”

UTEP will be back in action against UTSA Saturday (Oct. 30) at 12 p.m. MT at the Convocation Center. The match will be live streamed on CUSA.tv, with live stats available.