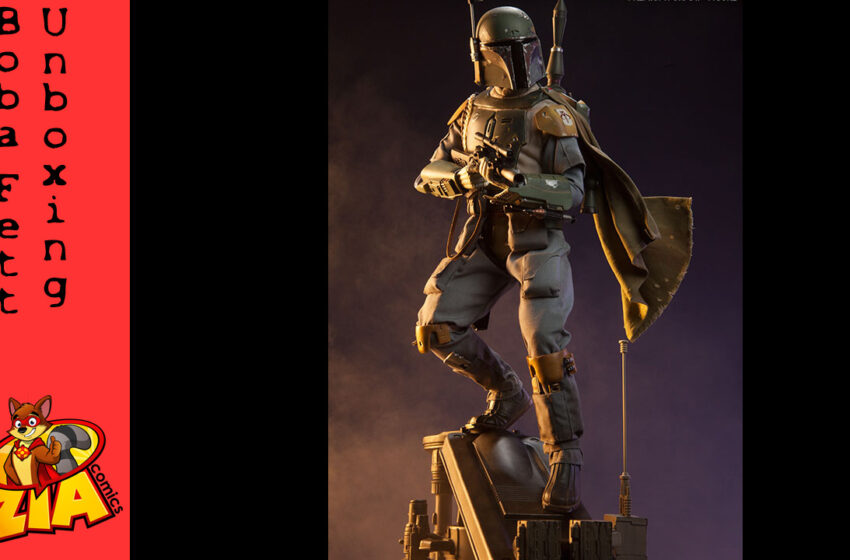 Patrick from ZiaComics.com shows us what’s in the box for the SideShow Collectibles Boba Fett Premium Format Figure.

This figure was Inspired by Boba Fett’s brief, but unforgettable appearance in Star Wars Episode V The Empire Strikes Back.  Sideshow’s artists have captured every detail of the infamous Boba Fett. This figure is Limited Edition: 2500.

Boba Fett is a name that strikes fear in the hearts of fugitives across the galaxy. This figure depicts him as he scouts his mark from a high rise platform in Bespin’s Cloud City. Blaster at the ready, the elite bounty hunter commands the advantage with his custom fit Mandalorian armor and jetpack.

His poseable cape, helmet, and rangefinder allow collectors to create the perfect dynamic display down to the last detail. He was recruited by Darth Vader and Jabba the Hutt to hunt down the Millennium Falcon. He has a hefty bounty in his sights as the elusive Han Solo has evaded him for the last time.

Out of the box the Boba Fett Premium Format Figure arrives in five basic pieces.  There is a head, body, hand with blaster, and a two-part base. He’s simple enough to assemble and there is no real worry of damaging the pieces. They combine easily and are solidly crafted.

The five big pieces are easy enough to figure out. There are three mini-pieces that will cause you to scratch your head and wish for the inclusion of an instruction sheet. It turns out that they slide into the pouches at the top of Fett’s boots.

The Boba Fett Premium Format figure stands more than 2 feet tall.  Although SideShow is calling this a figure, it is much closer to being a statue.  True to SideShow there are some limited mobility points in the head.  The cloth cape has wires embedded into it allowing it to be posed in numerous ways.  Boba even has his Wookiee braids draped over his shoulder.