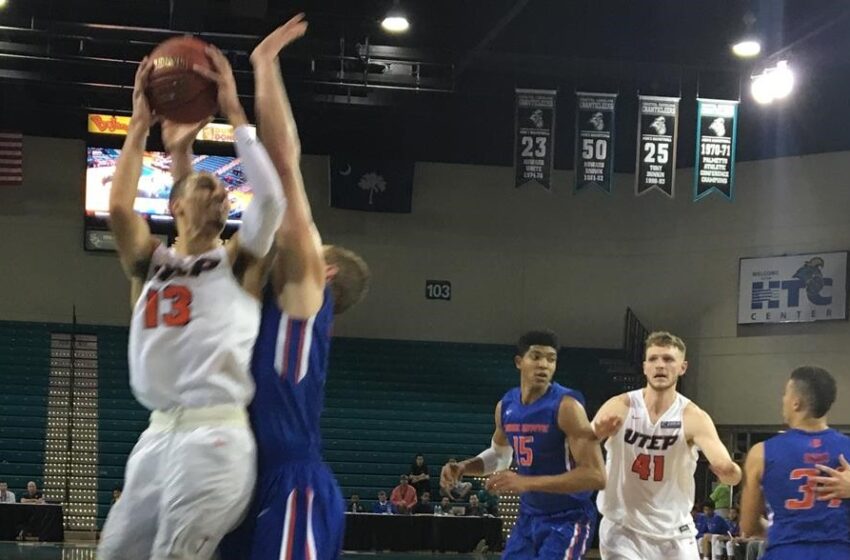 MYRTLE BEACH, S.C. – Chandler Hutchison converted a three-point play with 3.1 seconds left, as Boise State rallied from a five-point deficit in the final minute and beat UTEP, 58-56, in round one of the Puerto Rico Tip-Off on Thursday in Myrtle Beach.

UTEP will face South Carolina on Friday at 8:30 a.m. MT on ESPNU.

The Broncos (3-0) trailed 56-51 with about 50 seconds left after Omega Harris drove for a layup before scoring the final seven points.

The Miners (1-1) turned it over with 19.6 seconds remaining leading 56-53, as Evan Gilyard stepped out of bounds on the inbounds play.  Hutchison dunked and Keith Frazier was fouled with 9.8 seconds left in a one-point game.  Frazier missed the free throw, setting up Hutchison’s game winning play.

“We obviously are sick about the outcome of the ballgame,” UTEP coach Tim Floyd said.  “I’m really proud of our kids and how hard they played.  We are much better defensively than we were this time last year.  We played a very good Boise State team and had our opportunities.  We missed a free throw here, we missed a finish there, getting the ball inbounded safely on the sideline out-of bounds, all of those things contributed and we had a defensive breakdown late.”

UTEP was still up by seven (52-45) with under four minutes remaining, but couldn’t close it out.

“We had our opportunities and didn’t handle game situations well late,” Floyd said.  “I’ll take responsibility for us not getting the ball inbounded safely. That’s something we should be able to do but it’s something that happened. All we had to do was get it inbounded, although you’ve got to make the free throws as well.”

The Miners outscored the Broncos 26-10 to start the second half.  UTEP held Boise State to 31 percent shooting over the final 20 minutes.

Keying the second-half run was Keith Frazier, who scored 22 points in the game and 13 in the second half.  At one point he made three consecutive three pointers, part of a stretch where the Miners turned a 40-34 deficit into a 46-41 lead.

Frazier added 10 rebounds as the Miners won the battle of the boards 47-38.

Matt Willms was the other UTEP player in double figures with 11 points, eight rebounds, five blocks and two steals.

“I was proud of our defensive effort. It was just special in the second half,” Floyd said.  “We got down by a considerable margin in the first half and guarded well and guarded for long periods of possessions. We got some nice play from Tirus Smith off the bench when Matt Willms needed a blow. Isiah Osborne helped us in the second half as well.”

Marcus Dickinson was the leading scorer for Boise State with 13 points in a reserve role.  Hutchison and Alex Hobbs added 10 points apiece.

“We have to make better decisions in terms of trying to get ourselves to the foul line,” Floyd said.  “There’s a reason why they didn’t have many fouls with under a minute to go and had to foul quickly four times because we didn’t get the ball to the rim enough. It’s early in the season and we will get better on those things.  Give Boise State credit.  They made a couple of plays late, and their great players stepped up and made plays.”

MINERS MEET GAMECOCKS IN CONSOLATION BRACKET
UTEP (1-1) takes on South Carolina ( 2-1) in the consolation bracket of the Puerto Rico Tip-Off at Myrtle Beach on Friday at 10:30 a.m. MT.  The game will be televised on ESPNU.

The Miners and the Gamecocks are meeting for the second time.  South Carolina topped the Miners, 67-64, in the first round of the Sun Carnival Classic Tournament on Dec. 28, 1989 in El Paso, despite six blocks from David Van Dyke and a double-double (14 points/10 rebounds) from Antonio Davis.  UTEP Coach Tim Floyd is 1-1 versus South Carolina, with both games coming when he was the head coach at USC.

ON THE AIR
Rich Hollenberg and LaPhonso Ellis will have the call for Friday’s game on ESPNU.  The English radio broadcast is available on KOFX 92.3 FM with Jon Teicher (play-by-play) and Steve Yellen (color) describing the action.

A Spanish radio broadcast is available on ESPN Deportes 1650 AM, with Omar Ropele on the mike.

FRAZIER’S BIG AFTERNOON
Grad transfer Keith Frazier scored 22 points, one shy of his collegiate high, while adding a game-high 10 rebounds versus Boise State on Thursday.  Frazier scored 23 points twice during the 2015-16 season at SMU, against Brown and New Hampshire.  He picked up the third double-double of his collegiate career versus Boise State.  The first came against Illinois-Chicago during the 2014-15 campaign (16 points/10 boards), and the second versus Kent State during the 2015-16 season (19 points/10 rebounds).

WILLMS’ BLOCK PARTY
Senior center Matt Willms posted five blocks against Boise State on Thursday, tying his career high originally established versus Wake Forest on Nov. 17, 2016.  In the process, Willms moved into eighth place on UTEP’s all-time blocks list with 105, passing long-time NBA standout Antonio Davis (104).  His next target on the list is Ralph Davis, who holds down seventh place with 107 rejections.  The Miners have 15 blocks in two games, as Willms leads the way with seven.

HARRIS MOVES UP TOO
Senior guard Omega Harris had a quiet six points versus Boise State on Thursday, but that was enough to move him up a spot on the Miners’ all-time scoring list.  He now ranks 31st with 1,059 points after passing Kimani Jones-Young (1,058).  Directly ahead of Harris in 30th place is David Van Dyke with 1,077 points.

GOING THE DISTANCE
Senior guard Omega Harris played the full 40 minutes against Boise State on Thursday.  It marked the third time in his career that he has gone the distance in a regulation affair and the fourth time he has been on the floor for 40+ minutes including overtime contests, all since the start of the 2016-17 season.

WINNING THE REBOUNDING BATTLE
UTEP had posted nine consecutive victories under Tim Floyd when outrebounding opponents, dating back to last season, prior to Thursday’s setback at the hands of Boise State.  The Miners outboarded the Broncos 47-38, including 14-8 on the offensive glass.  The 14 offensive boards tied UTEP’s season-high for the entire 2016-17 campaign, achieved on Nov. 23, 2016 versus Southeastern Louisiana and on Jan. 12, 2017 versus FIU (double overtime).  UTEP has a +14.0 rebound margin through two games as Keith Frazier is averaging a team-best 9.5 rpg.

THAT’S UNUSUAL
The Miners dropped to 118-10 under Tim Floyd when leading with five minutes to go, and 80-17 when opponents shoot less than 40 percent with Thursday’s 58-56 loss to Boise State.  The .350 field goal percentage by the Broncos was the worst by an opponent in a UTEP loss since Southern Miss shot 33.3 percent in a 71-58 victory at Hattiesburg on Jan. 28, 2016.

DYNAMITE “D”
UTEP’s first two opponents have shot 33.6 percent from the field, including Boise State’s .350 effort on Thursday.  The Miners have allowed less than 60 points in two games to start a season for the first time since 2007-08.  UTEP hasn’t limited its first three foes to fewer than 60 points since the 1981-82 campaign.

NEWCOMERS CARRYING THE LOAD
Two games into the 2017-18 season, UTEP has received 58 percent (91-of-156) of its points from newcomers.  A newcomer has led the Miners in scoring in both games (Isiah Osborne 17 points versus Louisiana College, Keith Frazier 22 points versus Boise State).  Breaking it down even further, the Miners’ team leader in points, rebounds and assists in each of the first two games has been a player in his first year wearing the Orange and Blue.